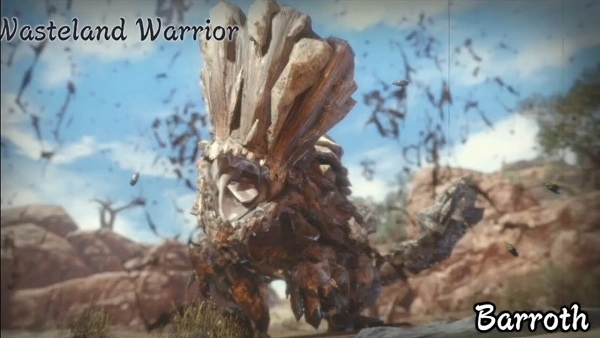 If you’re looking for a larger challenge in Monster Hunter Rise, Barroth is your go-to monster. You can take on this monster once you reach three-start hunter challenges and get access to the Sandy Plains. Barroth is a large dragon and can easily toss large chunks of junk at you. It also releases hot steam from the top of his head. You can find Barroth in regions 2, 7, or 9 of the Sandy Plains. In this boss fight guide, I will explain everything you need to know on how to beat Barroth in Monster Hunter Rise.

To beat Barroth in Monster Huner Rise, you need to understand its behavior and attack patterns. Moreover, you must know where to attack and when. Knowing Barroth’s weak points goes a long way to taking it down.

Barroth uses a charge attack but the move is telegraphed with a loud screech, and steam coming out of its head. If you close to it and in direct line of sight, Barroth will often lean back and release three mud shots. Mud seems to be its go-to move as it also shakes like a dog to spray mud all around it in a circle, however, you can avoid this by standing near the Barroth. Often, Barroth will move to the side and tries to shoulder check and knock you down, and mud shoots out of its side while performing this attack.

When fighting Barroth in Monster Hunter Rise, focus your attacks on its torso, forelegs, or its tail. Forlong is the weakest point so focus more on that. Use any weapon that does blunt damage and if you are to use elemental damage, go with fire or ice.

At the start of the fight, Barroth will likely freeze you in place but that only lasts for a few seconds. Its next move is the charge attack or the mud throw. The best move is to get underneath Barroth as often as possible to avoid these attacks. Any weapon that does blunt damage should be aimed at Barroth’s head and forelegs to break them off. If you see it run off it is probably getting more mud to throw you. You can clean yourself by using a cleanser or a Nulberry.

And that’s everything you need to know on how to beat Barroth in Monster Hunter Rise. Need more help? See Hammers, Dual Blades, Great Sword, How to beat Barioth, How to beat Lagombi, How to get Giant Wirebugs.