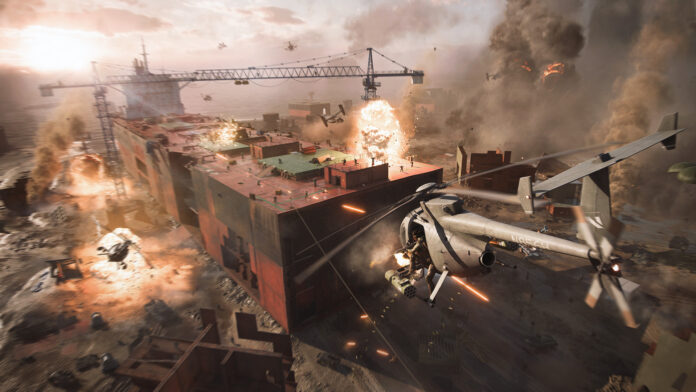 Battlefield 2042 is the latest game in the long-running franchise. The last couple of games were set in World War 1 and WW2 settings and this time, EA Dice has opted for a near-future setting. The game is well-optimized and runs smoothly on a number of PC configurations. Still, Battlefield 2042 PC players are experiencing errors and issues like DirectX error, 100% CPU Usage, DXGI ERROR DEVICE HUNG error, Error Code 15-7A, in-game crash, mouse input lag, player freezing, AMD Driver crash, Msvcp140.dll missing, and more. Here I have compiled a list of errors and issues that PC players are experiencing along with their fixes and workarounds.

Battlefield 2042 is set in a near-future setting and is a direct sequel to Battlefield 4. However, BF2042 doesn’t have a single-player campaign but, EA DICE intends to keep the narrative moving forward with animated shorts and in-game maps.

Battlefield 2042 is a cross-gen game but, DICE has opted to only use DirectX 12. While DX12 improves a game’s performance, it also means that if you don’t have a GPU that supports DX212, you won’t be able to play it. Overall, the game isn’t very demanding and can run on a number of PC configurations smoothly, provided, players make some graphical sacrifices. Despite that, Battlefield 2042 PC players are reporting errors and issues like DirectX error, 100% CPU Usage, DXGI ERROR DEVICE HUNG error, in-game crash, mouse input lag, player freezing, Error Code 15-7A, AMD Driver crash, Msvcp140.dll missing, and more.

The following are the errors and issues that PC players are experiencing with Battlefield 2042 along with their fixes and workarounds.

Battlefield 2042 PC players are reporting that as soon as they launch the game, it reboots or restarts the PC. Here is how to fix the BF2042 PC reboot at launch.

I did notice that almost all of the PC players facing the PC reboot issue are using Ryzen CPUs. Apparently, Easy Anti-cheat causes the PC reboot when the game is launched. Battlefield 2042 uses the Easy Anticheat to keep hackers out and that is causing the game to crash. If you look into the event viewer, players will find that Easy Anti-cheat is causing the reboots. You don’t need to delete Easy anti-cheat to fix it. To fix the Battlefield 2042 PC reboot, players need to update the BIOS of their motherboard. This fixes the BF2042 PC restart issue.

Alternatively, players can try repairing the Easy Anti-cheat. the setup is located in the game’s folder. Run the setup and repair it and the BF2042 will stop rebooting your PC. However, it might not work for everyone.

A lot of Battlefield 2042 PC players are reporting that the game is using 100% of the CPU while the GPU usage is only 5 – 10% or even less. One reason for this issue could be threaded optimization in Nvidia Control Panel. Open Nvidia Control Panel > Manage 3D Settings > Program Settings > select Battlefield 2042 from the list. Scroll down in the options and select “Off” for “Threaded Optimization” and hit apply. This will fix the BF2042 100% CPU usage.

Battlefield 2042 PC players are reporting the following error and are unable to play the game. Here is how to fix it.

Battlefield 2042 PC players are reporting that the game isn’t starting or is crashing at launch and here is how to fix the crash at launch issue. As I mentioned above, BF2042 only uses DirectX 12. If you don’t have a GPU with DX12 support, the game won’t work. Furthermore, the game only supports 64-bit Win 10 OS and won’t work on 32-bit or old operating systems.

Your anti-virus/firewall is probably blocking the game. Allow the game through the firewall and the issue will be fixed. In case you are using an ant-virus, either disable real-time protection or exclude the game folder from it, I recommend the latter. After that, verify game files, launch Battlefield 2042 and it won’t crash anymore.

Using a VPN also causes the game to crash or not launch at all. Disable the VPN and the issue will be fixed.

First, try updating your GPU driver to fix this DirectX error. If you are already using the latest GPU driver then revert to a previous driver version to fix the DXGI_ERROR_DEVICE_HUNG error.

If the above fix didn’t work, your GPU is the reason behind the BF2042 DirectX error. Either it’s overclocked or it’s not handling the game’s load really well and causing the BF2042 DXGI_ERROR_DEVICE_HUNG crash. Revert the GPU to its default GPU clock if it’s overclocked.

Alternatively, players can cap Battlefield 2042’s max FPS to reduce the GPU and CPU load and fix the DXGI_ERROR_DEVICE_HUNG error in the process. Open Nvidia Control Panel > Manage 3D Settings > Program Settings > select Battlefield 2042. Enable Max FPS Limit and set the value for it. It’s a trial and error to find at which value the game becomes stable to fix the DXGI_ERROR_DEVICE_HUNG crash.

Battlefield 2042 PC players are reporting that the game is crashing randomly while playing and here is how to fix it. The first fix players must try is to run the game as an administrator to fix the BF2042 in-game crash. Right-click the game’s executable > Properties > Compatibility tab > check “Run this program as an administrator” and press OK. Launch Battlefield 2042 and it won’t crash while playing.

Using third-party tools and software that run in the background and interfere with the game like MSI Afterburner, RGB software, and more can cause Battlefield 2042 to crash. Disable any third-party software you have installed and also disable in-game overlays like Steam overlay, Origin in-game overlay, and GeForce Experience overlay to fix the BF2042 in-game crash.

Your outdated GPU driver can also cause Battlefield 2042 to crash in-game. Update the GPU driver and make sure to do a clean installation to fix the crash.

If the above fixes failed to resolve the BF2042 in-game crash, then your GPU is probably the issue. It’s either overclocked or not handling the game’s load really well. If the GPU is overclocked, then revert it to its default GPU clock.

In case the GPU isn’t overclocked, then use MSI Afterburner and start reducing the GPU clock by 50 MHz. You don’t need to need to go below 200 MHz. While reducing the GPU clock will take some load off the GPU but it also negatively impacts game performance. If at 200 MHz the game doesn’t stop crashing, it won’t be fixed if you go any further. Alternatively, players can try lowering the graphics settings.

If you don’t want to mess with the GPU clock then I suggest you cap the game’s Max FPS. Doing this will reduce GPU and CPU load and will stop Battlefield 2042 from crashing. Check under “DXGI ERROR DEVICE HUNG Fix” above to see how to cap the game’s Max FPS at your desired value to fix the in-game crash.

Battlefield 2042 PC players are reporting in some matches the player character doesn’t move and just freezes while other players are moving around them. According to reports, this issue is caused by Origin in-game overlay. However, for some players just disabling the ORigin in-game overlay is not enough. In that case, go to the Origin folder and delete igo64.dll. This will fix the player freeze in Battlefield 2042.

AMD GPU users are reporting that Battlefield 2042 crashes with a Driver crash error message and here is how to fix it. The AMD Driver crash is occurring due to an outdated GPU driver. Install the Radeon Software Adrenalin 21.11.3 and the driver crash error will be fixed.

Another reason behind the mouse stuttering or input lag is the future frame rendering option. Disable in from the game settings and the mouse won’t lag or stutter in Battlefield 2042.

Msvcp140.dll is missing is another error that PC players are experiencing with Battlefield 2042. To fix the error, install Microsoft Visual C++ Redistributables both x64 and x86 versions to fix the error.

PC video games often experience performance issues and Battlefield 2042 is no exception. PC players are porting stuttering and low FPS issues even on the latest GPU drivers. Here is how to fix battlefield 2042 stuttering.

One reason behind the BF2042 stuttering is the latest Nvidia drivers. Players are reporting that reverting to Driver version 472.12 fixes the stuttering and boosts FPS.

Apply these settings and players will notice improved FPS and stuttering will be gone.

That is all for our Battlefield 2042 fixes for errors and issues like game Rebooting PC, in-game crash, Stuttering, DXGI ERROR DEVICE HUNG, DirectX error, 100% CPU Usage, and more. If you are facing errors and issues with other PC games or your PC then also see our hub for commonly occurring PC errors and their fixes.