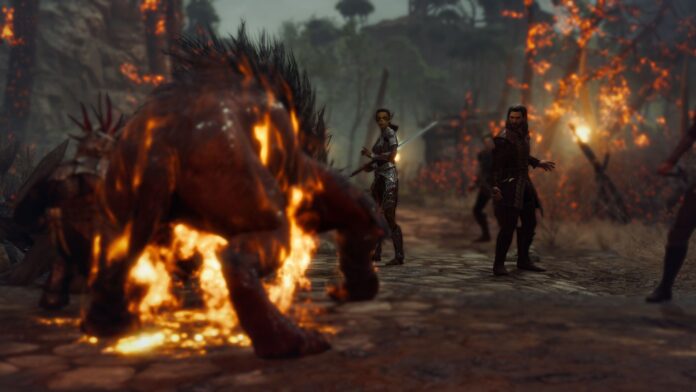 If you choosing to play as a ranger you can transform into the Hunter at level 3 in Baldur’s Gate 3. Hunters get a powerful passive which gives them an edge in combat. You will be given multiple passives to choose from including the Colossus Slayer which gives you an extra 1-8 damage with a weapon attack. You can use this passive with full health targets so Hunters can do plenty of damage.

Once per turn your weapon deals an extra 1d8 damage if the target is below its hit point maximum.

You can also go with Hunter’s Mark spell which does a decent amount of damage too. You Hunter’s Mark does 1-6 damage but the target should be killed as soon as possible, otherwise, you can’t reapply it for free. Killing an enemy faster isn’t usually a problem but we suggest using Colossus Slayer to finish off the enemies, and also free up a lot for another spell. Both of these spells work really well together. Keep in mind that you can’t use the Ensnaring Shot on enemies as both of them use Concentration.

Character creation is a key part of your Hunter Build in Baldur’s Gate 3. Here you will choose race, backgrounds, skills, and abilities.

For this Hunter build you should go with Dexterity, Constitution for HP and Concentration, and Wisdom.

Skills aren’t the most important part of this build. You will have high Dexterity and Wisdom so choose skills that complement these two abilities.

As far as passives go, select Beast Tamer if you have Astarion or Urban Tracker in your party.

When you reach Ranger level 2 you get two additional Spells and 2 Spell Slots. Use Speak with Animals and with it you should get Hail of Thrones or Ensnaring Strike. At level 2 you also get a passive so choose Archey for +2 Attack Rolls with Ranged Attacks.

Ranger level 3 will turn your build into the Hunter subclass where you can choose from one of three passives. For this Hunter build go with Colossus Slayer. You cal also pick a third Ranger spell so get either Cure Wounds, Hail of Thrones, or Ensnaring Strike.

At Hunter level 4 you get two ability points for Dexterity.

Last but not the least, weapons should also be a big focus for this build. Use a Longbow and get Longbow +1 later on. For your melee needs you should dual wield Finesse weapons such as the Shortswords. As for your armor, use the Studded Leather Armor and also get the Githyanki Half Plate.