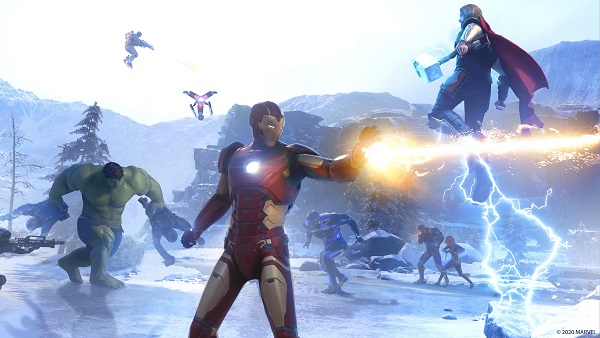 Marvel’s Avengers is a lengthy game where you deeply explore the stories and adventures of Thor, Hulk, Iron Man, Black Widow, Captain America, and Kamala Khan. The campaign revolves around the Avengers taking on AIM. However, the end of the campaign is just the beginning for bigger and better. Crystal Dynamics is working on an immense variety of post-game content for Marvel’s Avengers.

As you progress the story and customize your heroes with loot drops, you can jump into the War Zone missions with friends or AI companions. Speaking with the PlayStation Magazine, Creative Director Shaun Escayg, players should think of the main campaign as the origin story of Kamala Khan bringing back the Avengers. “But that’s just the jumping-off point.”

Once the campaign resolves it opens up into this sort of AIM versus citizens, the superpowered, and the heroes themselves.

The War Zone missions let you take on AIM and other adversaries, you can contract from other factions such as SHIELD, and sometimes Nick Fury.

All of these missions are available through the War Table in the ruined helicarrier base. Over the course of the game, you will restore and rebuild the helicarrier to shelter from AIM.

So you’re looking at the war table map, there’s different regions, and those regions have different activities on them. It could be a mission that advances the story of a hero, it could a faction mission that helps SHIELD rebuild, it could be becuase some AIM hotspot, some big threat has been detected, and you have to do that, and you’ve got a limited amount of time to do it.

War Zone missions will develop the stories of factions so you will get to know more about them, their history, and the troubles they face. Marvel’s Avengers War Zone missions come with narrative wraps.

So you’re going off and exploring that thread that then we get to add post-campaign, but even post-launch, as we actually add more regions and more heroes beyond that.

Marvel’s Avengers post-game content will release for free as promised. However, for premium skins, players will have to spend money. If you are interested in learning more about the game then you can check out our initial impressions.