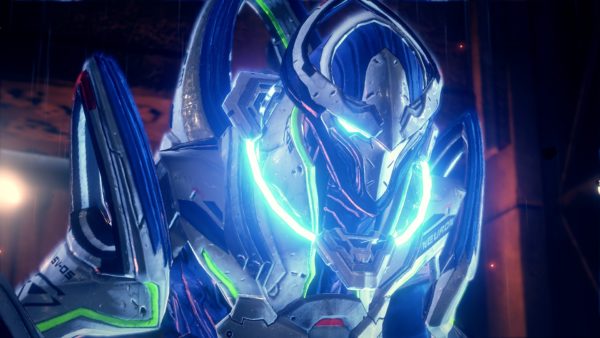 Legion is an important part of the combat in Astral Chain and each Legion comes with abilities of its own. Our Astral Chain Legions Guide will help you with all of the Legion types and how to use their abilities in combat.

There are five types of Legions in the game each being visually distinct and obviously, each Legion fights differently. Legions grant players tolerance to Red Matter and also allows players to see Red Matter, Legions, and chimeras.

Legions come with abilities of its own. Each Legion can be equipped with only two abilities at a time.

This is a humanoid legion with textured blue skin. It has Swords for Arms which it uses as weapons. Having swords for arms, this Legion gets up close and personal with enemies to deal damage.

Special Abilities
Swod Legion can cut through the energy waves and in turn, leaves them stunned and open to attacks. Players can adjust the angle of the Sword Legion Attacks before summoning him.

Also, Concentrating during the attack will slow down time allowing players to aim easily. This ability can also be used to destroy barriers in the Astral Plane. Not only that, Sword legion can also interfere with electronic devices and can be used to access data to help in investigations.

This legion is quite similar to the Sword legion in terms of looks except it doesn’t have legs. Instead, this Legion in Astral Chain floats around when summoned.

Special Abilities
Arrow Legion materializes a large spiked bow and shoots energy projectiles. However, this Legion likes to engage enemies from a distance, unlike the Sword Legion.

Concentrating while aiming will slow down time and will make it easy to hit small and fast-moving enemies. This ability can also be used to hit distant switches in the Astral Plane to solve puzzles.

This one is a canine Legion and bears resemblance to a dog. In terms of combat is abilities, this legion is the most unique of all five legions.

Special Abilties
This Legion in Astral Chain can also be mounted and it runs faster than the protagonist. This ability can be used to avoid enemy attacks and go through areas where speed is necessary.

Beast legion can also track scents to find people and objects to help with investigations. Also, this legion can dig out items buried in the ground.

This is the Legion that deals the most damage after Axe legion. This legion has huge arms can be worn as armor.

Special Abilties
As I mentioned above, Arm Legion’s arms can be worn as Suit of Armor. This allows players to land heavy attacks using the Legion’s fists. Furthermore, Arm Legion allows players to float while being worn and can carry the protagonist across dangerous or contaminated areas without taking any damage.

Given that Arm Legion is strong, it can throw or move objects that are too heavy for the protagonist like heavy doors or falling signboards. This will allow players to go to areas that are otherwise unreachable.

Axe legion is a support type legion that delivers both offensive and defensive capabilities. Also, Axe legion has the highest damage of all the Legions.

Special Abilties
Given that it’s a support legion, it’s axe can create an energy barrier to protect itself and the player. It can also counter blocked attacks using its axe.

The axe can also inject energy into the area where it hits causing an explosion to destroy objects and surfaces that other legions can’t break.

How To Use Legion Abilities In Combat

In the battle, you need to press ZL to summon the Legion and it only remains active for 100 seconds. The Legion will attack on its own and can only be moved around by players by holding [ZL]. Using this, players can use the Legion to collect Red Matter or solve puzzles using their unique abilities.

Use the assigned Legion Abilities by pressing X or Y respectively for each ability.

Chain bind can also be used in the Astral Plane to destroy gates. Furthermore, players can use the Legion to pull themselves across long gaps that only legions can cross.

Eavesdrop
With the legions being invisible to humans, they can be used to eavesdrop on conversations to get information from those who don’t want to share it with the protagonist.

Keep in mind that in battle when you control the Legion your character will stand still momentarily. While it’s won’t create any hassle but in situations where you are surrounded by enemies, use these Skills carefully.

That is all for our Astral Chain Legions Skill Guide with tips on how to use Legion abilities in combat. If you need more help with the game check out Chimera Bosses, Gene Code Farming, and Money Farming guide.