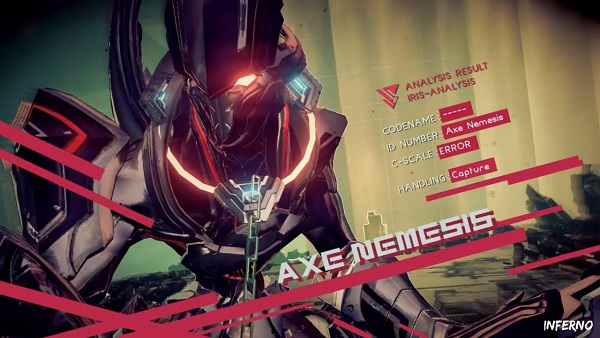 In our Astral Chain Axe Nemesis Boss Guide, we break down the attack patterns of the boss as well as shed light on some tricks you can utilize to defeat the boss.

How to Beat Axe Nemesis Boss

When you first encounter Axe Nemesis in Astral Chain, you won’t be able to damage it one iota. This is due to the Nemesis’ barrier/shield that blocks any incoming damage. To get rid of it, you could employ either of two possible options. Either focus damage on the shield at a close distance with the Gladius Sword. This demands for timing your strikes since you will also need to evade the boss’ attacks.

Alternatively, you can keep a safe distance from Nemesis and rely on your Arm Legion instead. The tool covers more distance but will deal less damage.  Also the start up is a little slow so sometimes you might be vulnerable to strikes from the boss enemy.

Now that you’ve removed the guard of Axe Nemesis, dish out as much damage as you can on the boss enemy.  The recommended weapons to use are the Beast Legion or the Gladius Sword. The X-baton weapon can also be used, so switching between the three described allow you to optimize your combos for quick but lethal strikes.

The attacks to look out for are is the Axe Plummet and the Spinning Attack. The former is an area-of-effect type attack that covers a small radius in the explosion. You’ll know when the boss is initiating the attack when you see it put the glowing axe down on the ground. Nemesis will then hit this axe to cause an explosion. You should immediately back off.

The other attack, the Spinning one, is a move that makes Nemesis invulnerable during its active window. Nemesis will spin and close down the distance to the player while chipping away at the health if it gets close. It’s best to roll over/dodge when you see such an attack get executed.

Then there are other attacks including one that highlights certain points on the ground. These points will take some damage so get away from these as soon as possible. You can also use the Beast Legion to find a safe spot if you’re stuck in a rock and a hard place in terms of this attack.

Lastly, the Whirlwind strike from Axe Nemesis is a highly damaging move that should be avoided at all cost. This arises when Nemesis leaps high into the air and comes crashing down creating a whirlwind. Again, the Beast Legion comes handy in this case as well.

As you switch between the different weapons and find windows of attack, dish damage and chip away at the health of Axe Nemesis. You will eventually bring him down without much hassle.