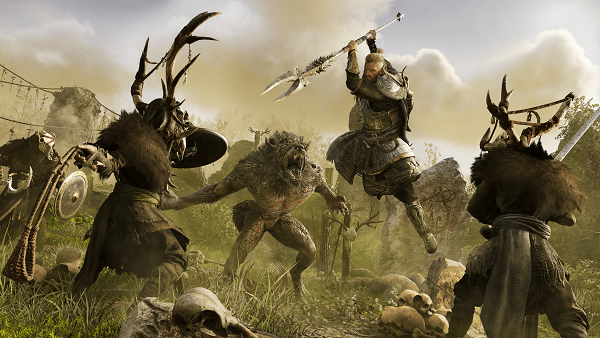 Drengr in Assassin’s Creed: Valhalla are powerful warriors who challenge Eivor for a death battle. These mini-bosses can be pretty tough, especially with a scrappy build. Wrath of the Druids DLC has added two more Drengr in the game who can be found in Ireland. Finding and defeating these Drengr is a part of Thorget’s Drengr questline. In this guide, we’ve detailed all there’s to know about where to find Thorget’s Drengr in AC: Valhalla – Wrath of the Druids to get Thorget’s Shield.

There are only 2 Drengr in Wrath of the Druids DLC for AC: Valhalla – Blud and Hogne. Unlike the Drengr in the base game, these ones are pretty simple to defeat. Below are the locations of all Thorget’s Drengr in Ireland:

The first Drengr is Blud the Giant who can be found in the Giant’s Causeway on the northeast edge of Ulster – check the top of the map to find her. Speak to Blud and accept her challenge to a battle when it presents itself. Refusing the challenge doesn’t have any implication – it can be started at any time. The fight with Blud is a fairly simple affair. Try to perfect-dodge to shoot at her 3 weakpoints and stun-lock her followed by a powerful blow. The fight shouldn’t take long after that.

The other Drengr whom Eivor can fight in Wrath of the Druids is Hogne, the Sea-Tossed and he can be found on a small island called Downpatrick Head, Connacht. Approach the Drengr to accept his challenge. Similar to Blud, this is another simple fight. Once again, aim to target his weakpoints after slowing time to make the fight even easier.

After defeating both Blud and Hogne, Eivor will be asked to travel to Lough Neagh. Once there, head over to the center of the lake and use Sýnin to locate the hidden chest – it should be on a small island in the middle of the lake. Once found, open it up to get Thorget’s Shield in AC: Valhalla – Wrath of the Druids. This superior Light Shield increases speed when close to full HP.