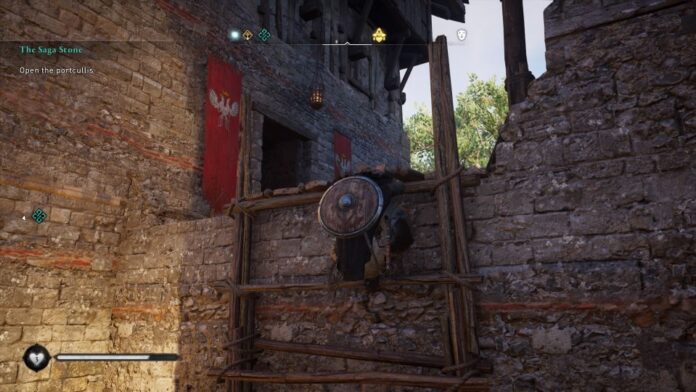 In this guide, we’ll walk you through “The Saga Stone” in Assassin’s Creed Valhalla. We’ll explain everything you need to know about this quest including how you can lower the drawbridge, open the portcullis and defeat Eadwyn.

The Saga Stone is the final quest of The Paladin’s Stone saga and you can start this one off by talking to Geadric at the Derelict Shrine of Camulus. During a cut-scene, Geadric will ask you if they should begin the attack on Eadwyn’s forces. You’ll get 3 options to choose from; “I have not weakened Eadwyn enough”, “I have other things to do” and “Begin the assault”. If you’ve completed chipping away or weakened Eadwyn’s hold on Oxenefordscire to a certain degree, choose the third one to begin the attack.

The difficulty of this battle is directly proportional to Eadwyn’s hold on Oxenefordscire, i.e if you’ve killed enough soldiers with the help of fyrd and destroyed enough supply carts, there will be less manpower and firepower at her disposal during the final battle.

Anyway, when you start the attack, you’ll notice a considerable number of men fighting alongside you. So, you can leave fighting with the standard enemies to them and focus on the main objectives. Upon reaching the castle, the first thing that you need to do is lowering the drawbridge.

How to Lower the Drawbridge

You can easily lower the drawbridge by shooting its link to the sides using your bow and arrows. Once you’ve shot down both links, the drawbridge will fall down and you can then proceed towards the next objective.

Your next objective will be to open the portcullis and this is where most players get confused and stuck.

How to Open the Portcullis

Portcullis is the inner Iron Gate which comes right after you cross the drawbridge area. It is a defensive measure and can only be opened from inside the gatehouse. To open the portcullis, you need to climb up the wall, then head down the stairs and besides the stairs, you’ll see the entrance to the gatehouse. Go inside, kill the enemies, and interact with the wooden handle to open the portcullis and complete this objective. Then, head down to the inner courtyard, and Lady Eadwyn will come running at you.

Defeating Lady Eadwyn is quite simple and easy. Just don’t go all-in on charging her head-on. Instead, let her come at you, parry her attacks, and use counter-attacks to efficiently take her down without much of a hassle. Also, stay in an area where your allies are present because every now and then, they’ll also take their turn in attacking her. You can use those moments to attack her weak spots; Left Knee and Right Elbow, using your bow and arrow. This takes a devastating blow at her health, and she goes down easily. Beware of her speed, however, and use the “deflect and counter-attack” strategy to defeat her easily in the midst of this chaos.
Choices

After you defeat Eadwyn, your attack on Cyne Belle Castle will be complete. A cut-scene will begin and you’ll get two different options to choose from; Exile Eadwyn or let Geadric look after her. You can choose either one without sweating it too much because this one isn’t going to affect the story outcomes or the ending of the game.

After this cut-scene, you’ll need to regroup with Sigurd, Basim and Fulke. To find them, just head to the objective marker and take the stairs to your right, all three of them will be there with the Saga Stone. And after you enter the room, a series of cut-scenes will begin to conclude this quest and The Paladin’s Stone saga.