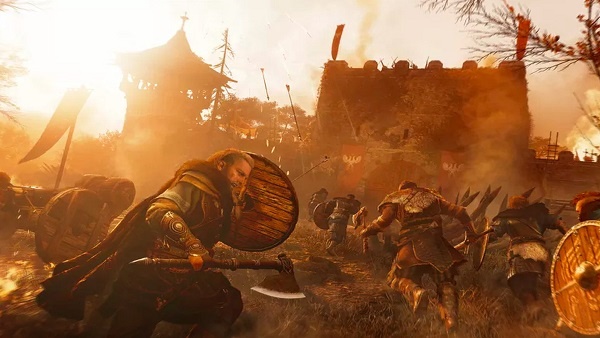 In this guide, we’ll walk you through “The Measure of a Norseman” in Assassin’s Creed Valhalla. We’ll explain everything you need to know about this quest including how you can fight against Oswald and also how you can burn the cargo during the raid.

Assassin’s Creed Valhalla The Measure of a Norseman Walkthrough

“The Measure of a Norseman” is the second quest in “The Tale of Thegn Oswald”. It can be found in Elmenham, West Anglia right after you complete the “Kingmaker” quest.
Your first objective will be to find and find and speak to Oswald. Just follow the objective marker and you’ll find Oswald working by the docks. After you find and talk to him, Finnr will appear in the cut-scene and you’ll need to help Oswald in his Flyting battle against Finnr. You’ll get to choose from different reply options; don’t worry about the order in which you choose as Oswald will eventually use all of these.

After the Flyting is over, you’ll get a new objective to meet Finnr. This one’s pretty far (700m) so it’s best you summon your mount for this one. Another easier and time-saving method to reach this objective is getting into a boat while you’re at the docks and sailing straight to it via the river.

After reaching the objective and talking with Finnr, you’ll have to duel with Oswald (3 times); nothing serious, just a friendly duel to rough him up for the king’s role. After the duel, you’ll need to take Oswald and Finnr on a Viking raid. Just get in your longship, sail to Serpent’s Landing and kill everyone.

To burn the carts and cargo, use the Torch from your quick actions menu. And if you’re too busy showing your combat skills to the enemies, don’t worry, your crew members will take care of it. After you’ve successfully burned the cargo and eliminated Rued’s men, talking to Finnr will complete “The Measure of a Norseman”.