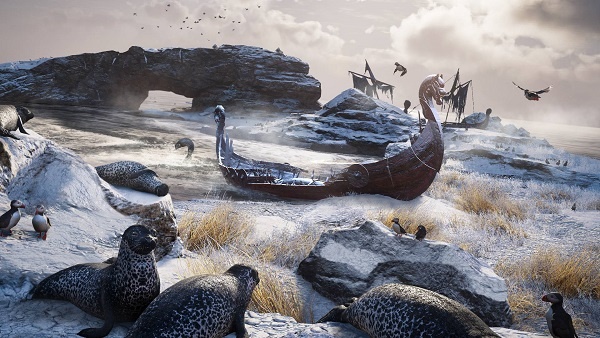 Not every Legendary Beast in AC: Valhalla is the same. Some are tougher than the others but none of them is parallel to Steinnbjorn. This hidden beast is easily among the toughest bosses in the game. In this guide, we’ve shared some tips to help players find and defeat Steinnbjorn in Assassin’s Creed: Valhalla.

Steinnbjorn is one of the toughest bosses in Assassin’s Creed: Valhalla. Unlike other Mysteries in the game, it doesn’t appear on the map until players get close to it. It’s a Legendary Bear that’s covered in ice and deals a lot of damage.

In order to locate Steinnbjorn in AC: Valhalla, travel to Serpent’s Tree in Jotunheim. Explore the area a little and it should appear on the map. It’s toward the north of Serpent’s Tree and southwest of Well of Mimir. After a little bit of climbing, players will come across the beast.

As mentioned earlier, Steinnbjorn is a Level 400 boss. It’s recommended to have a Character Level somewhere between 350 – 400 to attempt it. It may be possible to defeat it at a lower Character Level but we advise against it.

With that out of the way, let’s talk about defeating Steinnbjorn, starting with its attacks:

All of these attacks are telegraphed and can easily be dodged. With a Perfect Dodge, it becomes easy to destroy his weakspots – a bow is highly recommended to do this. Once destroyed, try to dash in and do a lot of damage. Since it’s an ice-based creature, it’s obviously weak to fire – keep that in mind! The battle takes place in a large arena, therefore, players should’ve got a lot of room to work with. Try to be on the move at all times and not get hit.