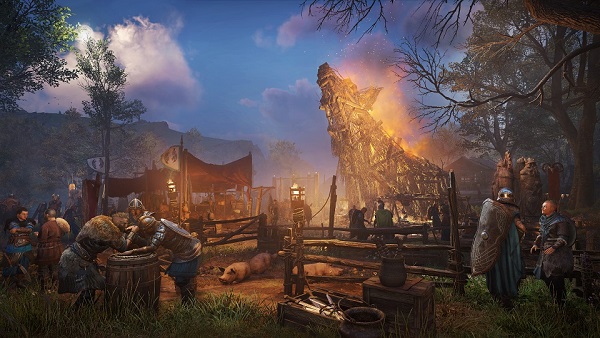 In the Feeding the Wolf quest, Eivor, as the leader of Ravensthorpe, will be tasked with collecting the sacrifices and other precious offerings from the residents of the village and give them to the gods. These offerings and sacrifices are given to the gods to ensure that the warriors of the Raven clan would be successful in all upcoming raids in Francia to ensure the expansion of Paris. This guide contains all the details for completing the “Feeding the Wolf” quest in Assassin’s Creed: Valhalla – Sigrblot Festival.

This quest can be activated by speaking with Thyra. You can find Thyra standing next to the bonfire spot. Thyra will be wearing an orange scarf around her neck, this is how you will be able to recognize her more easily.

When you reach the shrines, you will have to read the letters that were left behind by the villagers to address the gods who have given what offerings. You will need to read out resident’s names and their prayers made towards the gods from the sheet of paper.

After this, you need to take an offering crate and take it back to Thyra in front of the bonfire spot and choose which God you want to offer this sacrifice. You can choose between Thor, Freyja, and Baldr.

After choosing the God to whom you want to offer the sacrifices, you need to collect tokens left behind by the residents to appreciate Eivor’s efforts to make the offerings reach the gods successfully.