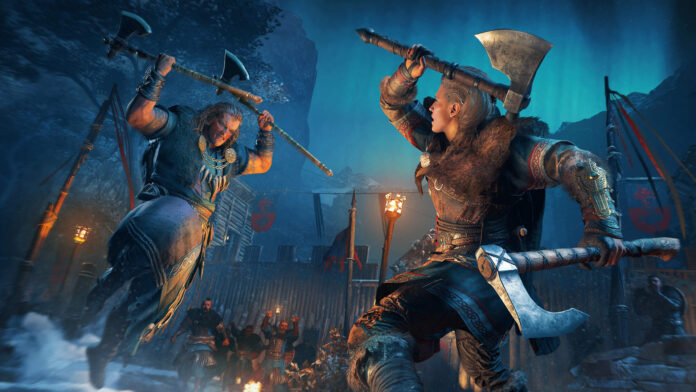 If you are getting tired of the main story and want a break or wish to get your hands on some extra XP to level, rewards, and more, Assassin’s Creed Valhalla side quests are for you. Each region in the game has various side quests, some are easy to complete while others are a bit elaborate. In this guide, we will go through everything you need to know on how to complete Assassin’s Creed Valhalla Rygjafylke Side Quests.

In the Rygjafylke region, you can find 9 side quests. Each offers XP among other things and completing them all takes you closer to building stronger character.

Old Man on the Edge

Before you leave for England, you can complete some side quests in Rygjafylke. At the top of the highest peak, you will meet a man who has a weird request. He wants you to help him throw his stuff off the edge before he jumps as well, straight to Valhalla. Help him and watch him fall to his death. There are no rewards for this side quest but you can go down and loot his crates.

You will find a warrior sleeping in the mountains in his makeshift camp. When waking him up, he will start to sleepwalk and there is nothing you can do to wake him up. Follow him and after the chasm speak with him to complete this side quest.

The Plight of the Warlock

Near the river, you will find a hunter sitting outside his hut and speaking to himself. He will ask you to help him kill a Warlock who poisoned his sister. Apparently, King Herald himself has set a reward for this Warlock’s head. Go to the Warlock’s hut and kill him to complete this side quest.

You will meet Erlend, a young man who wasn’t born a warrior but still wishes to bring honor to his family. You will come across wolves fighting bears near his camp. Get their attention and lure them to Eriend’s camp. You will then have two options, help Erlend kill the beats or let him die in battle.

Sulke is trading you meet in this region. When you speak to him, you find out that he is trying to make money by selling things that belong to Eivor’s family. When you confront him, he tries to flee; catch and kill him to complete this quest.

At the settlement, you will meet Rolf who wants your help in choosing the right commander for his squad. Follow him to the docks and speak to him again. A fight breaks out between Eivor and three men, take them down or lose the fight, the outcome remains the same and Thorgil becomes the commander.

When you come across Hrorek, he will explain that the Jarl has been kidnapped. You must help him save the Jarl from a group of bandits. Follow him on the horse but when you reach the marker, it turns out, Eivor finds himself in the middle of an ambush. Kill the attackers and speak with Hrorek.

You will Hysing, who shows you around New England and tells a lot of interesting but weird things. At some point in the tour, he will panic about his king. The king is actually a straw dummy, you can choose to be honest about the king with Hysing or lie to please him.

A woman named Bil and her companion is looking for something. Speak with Bil and help her look for her comb. You can find the comb inside the water but you will have to deep dive. Use Odin’s vision for this search.