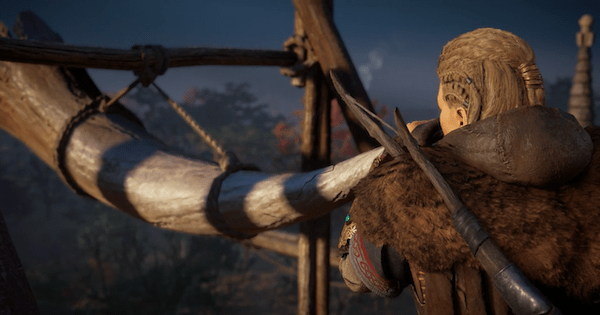 In this guide, we’ll walk you through “Raising Iron” in Assassin’s Creed Valhalla. We’ll explain everything you need to know about this quest including how you can defeat Rued’s men in King’s Bury and also how you can blow the horn at the top of Church Tower.

Raising Iron is the 4th chapter in “The Tale of Thegn Oswald” saga. You can start this one by finding and speaking to Finnr, speaking to him will start a cut-scene. While selecting the different dialogues options during the conversation, you can choose anyone you like as the outcome will eventually be the same.

After the cut-scene, Eivor will ask Finnr to ride alongside him to meet the reeve (sheriff) of Theotford. Just follow the objective marker and it’ll lead you straight to him. Another cut-scene will begin, in which the reeve will ask you to clear a nearby village named King’s Bury of Rued’s men, in exchange for his allegiance in the war against Rued’s clan. To assure the reeve of Theotford that you’ve taken back King’s Bury, you’ll also need to blow a large horn present at the top of the church’s steeple.

When you reach King’s Bury, show no mercy, and just eliminate everyone who crosses your path. All enemies are standard except one; a shirtless double ax-wielding Norseman. This one is pretty agile and hard to beat, but you can defeat him by parrying his attacks to lower his stun bar and then using your counter-attack moves to finish him off.

If you don’t want to go through the aching process of finding and killing literally every single one of the enemies, you can use the help of your raiding party with this mission. Simply start a raid on King’s Bury when you get this objective. Your raiding party will join you and wreak absolute havoc on Rued’s men. Fighting the tougher enemies inside the church will also become very easy with the help of your raiding crew. So, if you want it done quickly, you can always use the raiding method.

After you’ve killed Rued clansman in King’s Bury, you’ll get tasked with climbing the Church’s Tower to blow the horn and signal the reeve. After you’ve climbed to the top and blown the horn, go down to the courtyard and speak with the reeve. The reeve will inform Eivor that Theotford is in for the fight against Rued’s clan and that concludes this quest.