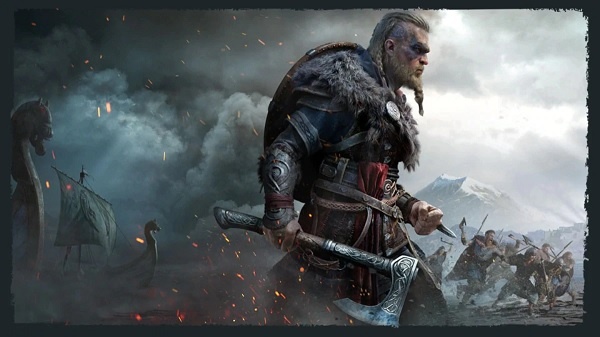 With the launch of AC Origins, Ubisoft significantly upped its game in terms of rendering technology. Assassin’s Creed Origins and Odyssey are one of the best looking games of this generation. But, that in-game beauty required a lot especially when it comes to CPU.

Here’s is how I am going to test Assassin’s Creed Valhalla PC performance. I start the benchmark from a relatively big settlement to see how the game performs while the CPU is being utilized for the AI. Then I fast travel to the longboat and sail to start a raid. Starting the raid will also activate a lot of AI routines which will require a lot of CPU. Let’s see how the game performs.

Ultra
Let’s start with the Ultra graphics preset at 1080p. As you can see in the video below, the GTX 1060 is handling Assassin’s Creed Vlahalla quite well at Ultra settings. While the game’s FPS is fluctuating between 30-40 but, it’s expected. Players can easily play this game at Ultra setting by capping the game at 30 FPS to achieve a stable experience if they want.

Furthermore, the game is completely GPU bound at the Ultra graphics preset. The CPU usage is not that high especially compared to AC Origins and Odyssey. The game maintains around 34 FPS on average. The CPU is only being used around 60% during the final stretch of the benchmark where the game has a lot of AI routines activated. This clearly shows the devs really put in the effort to optimize the game, unlike Watch Dogs Legion.

Very High
Now let’s drop the graphics preset to Very High and see how the game performs. The benchmark starts off strong with the FPS staying around 50. However, as we move through the settlement, we see the game only managing to run close to 40 FPS.

It’s clear that GTX 1060 is not capable of running Assassin’s Creed Valhalla at a high FPS, which is totally understandable. As you can see in the benchmark, the GPU is being fully utilized while the CPU usage stays around 605 on average.

What I find most interesting about Assassin’s Creed Valhalla is that when the engine is pushed to showcase the game’s draw distance, the FPS increases instead of dropping. Overall the game’s performance is as expected on a GTX 1060 at Very High graphics preset.

High
Things are not that much different at the High graphics preset compared to the Very High. Obviously, the High preset is rendering at a few FPS higher than Very High. Overall, the performance is more or less the same and even these graphics presets are not that much different from one another. Also, the GPU usage is still over 95% percent while the CPU is usage is 60% on average.

Medium
Assassin’s Creed Valhalla running at Medium graphics preset is where things get interesting. The overall FPS is higher compared to the High preset and sticks closer to 60 FPS been during one a lot of AI routines are activated.

What’s odd is that the CPU usage doesn’t change at all as it sticks close to 70% on average and the GPU is still being utilized over 95%. This clearly indicates that Assassin’s Creed Valhalla is a GPU-bound game. Meaning, the better the GPU the better the FPS will be.

Low
Things don’t change much for the Low graphics preset except that the average FPS is higher than the medium. At low graphics, GTX 1060 manages to render the game much close or 60 FPS and even goes above that.

As I mentioned above, system 2 is equipped with Intel Core i5-7600K 4 Core/4 Thread CPU, Gigabyte Geforce GTX 1070 Gaming G1 GPU, and 16GB of DDR4 RAM clocked at 3200 MHz. This system is to test the game’s performance on a low-end CPU combined with a relatively powerful GPU, and I have to say the game didn’t disappoint.

Compared to Watch Dogs Legion, which didn’t even manage locked 30 FPS at low graphics running on GTX 1070 and Core i5-7600K, Assassin’s Creed Valhalla is a big step up.

Also, you’ll notice stuttering in the videos for GTX 1070, that’s due to Shadowplay recording the gameplay. These stutters were not present in-game.

Ultra
At the Ultra graphics preset, the GTX 1070 coupled with a 4 Core/4 Thread Intel Core i5-7600K doesn’t disappoint. The GPU has no trouble rendering the game close to 60 FPS. Although, the game doesn’t drop below 60 FPS and goes as low as 45 FPS.

Very High
The GTX 1070 has no trouble rendering the game even at the Very High graphics preset. The FPS is closer to 60. The CPU limitation becomes quite apparent at the end of the benchmark where I start a Raid. This triggers a lot of AI routines, and CPU usage skyrockets, and the GPU is bottlenecked by the CPU. Perhaps, lowering the graphics quality further will help with that.

High
Things aren’t much different at the High graphics preset, and while High looks almost the same as Very High in terms of performance, it also performs the same. Also, the GPU becomes bottlenecked again at the end of the benchmark due to the so many AI routines demanding the CPU.

Medium
The GTX 1070 has no trouble running the game above 60 FPS at Medium graphics preset. The GPU easily manages to run Assassin’s Creed Valhalls at above 60 FPS. However, the CPU usage has increased, which is as expected.

However, at the end of the benchmark, the CPU usage goes 100% which causes the FPS to drop, but it stays in the mid-50s. Overall, it’s a great performance. Again, the stutters you are experiencing in the benchmark were due to Shadowplay and were not there in the gameplay.

Low
At low graphics preset, the game has no trouble running at above 60 FPS. However, the CPU usage is 100% all the way through the benchmark, and at the end of it, it becomes clear that Assassin’s Creed Valhalla requires at least a 6 Core/6 Thread CPU with the GTX 1070 to be able to pull off a steady 60 FPS.

This system is the most powerful of the ones we used to test Assassin’s Creed Valhalla’s PC performance. It has an Intel Core-i5-9400F, Zotac RTX 2060 Super 8GB, and 16 GB of DDR4 RAM.

Ultra
Starting with the game’s Ultra graphics preset at 1440p, the game’s performance is not bad. At this resolution and graphics settings, the game is completely GPU-bound as the CPU usage is quite variable and hovers around 80% of the time.

This is what I like about this game, it doesn’t rely on the CPU that much for its graphical settings, which is quite unlike Watch Dogs Legion and previous Assassin’s Creed games.

Interestingly, the CPU usage increases when we start the raid, but the game maintains its FPS.

Very High
Now, let’s drop the graphics preset to Very High; things don’t change much. The GPU usage is still above 90%, while the CPU usage is almost the same as the Ultra preset.

Even when we push the game engine by switching to the Raven to see the game’s draw distance, the game doesn’t drop FPS and manages it quite easily. However, when we get back to Eivor, that’s when we see the FPS drop a bit and stay there.

Now, Assassin’s Creed games run a lot of AI routines simultaneously, which requires a lot of CPU. So we tested if it’s the case with Valhalla. We started a raid in a rather big settlement.

This activates a lot of AI routines, and I was pleasantly surprised that Valhalla didn’t drop any FPS even in a crowded raid. The game manages to stay above 40FPS and on average, renders at 45 FPS at the Very High graphics preset.

Medium
Now let’s move to the game’s Medium graphics preset. The benchmark starts strong as the game is rendering over 60 FPS. However, as we move through the settlement, the FPS drops to the mid-50s and drops further when I switched to the raven. As for the CPU usage, it’s around 75% on average. As we switch back to Eivor, the FPS goes up and is quite close to 60 FPS.

Also, during the raid at the end of the benchmark, the game maintains FPS in the mid-50s. However, it’s quite disappointing that even in that medium setting, Assassin’s Creed Valhalla fails to lock at 60 FPS.

Low
Now let’s see how the game performs at the low graphics preset while rendering at 1440p resolution. The benchmark starts strong with the FPS being way over 60 FPS. As I moved through the settlement, the FPS dropped below 60. Overall, RTX 2060 manages to run the Assassin’s Creed Valhalla at almost locked 60 FPS at the lowest graphics preset.

It’s kind of disappointing that to run Assassin’s Creed Valhalla at 60 FPS; we have to drop the graphics preset all the way to low on an RTX 2060 Super. Even then, the FPS wasn’t locked at 60. Go get a consistent 60 FPS; you’ll have to drop the resolution to 1080p.

Overall the PC performance of Assassin’s Creed Valhalla is surprisingly good. The game is GPU bound for the most part and doesn’t stress the CPU to the point that it doesn’t have the headroom to utilize the GPU.