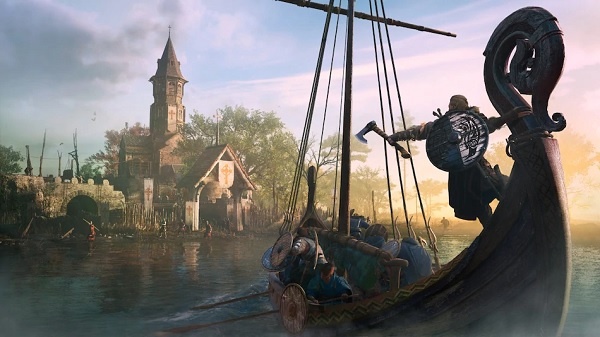 I have to say, I am impressed with Assassin’s Creed Valhalla’s PC performance, at least compared to Watch Dogs Legion. The game doesn’t rely on the CPU as much as previous Assassin’s Creed games or Watch DOgs Legion.

Assassin’s Creed Valhalla is GPU-bound for the most part which is one reason that helps with the game’s performance. Like the previous entries in the Assassin’s Creed franchise, Valhalla has a lot of graphics options that players can tweak on the PC version.

First, if you have an SSD installed on your PC then I recommend that you install Assassin’s Creed Valhalla there as it’ll not only help with the game’s load times but will also keep the game from stuttering as it streams textures.

With that out of the way, let’s begin with the Assassin’s Creed Valhalla PC Optimization guide. The following are the game’s graphics options along with a brief explanation about what they do and a recommended setting for each option.

This is pretty much self-explanatory. FPS Limit setting allows players to limit the max FPS the game can be rendered at. Since we are targeting 60 FPS, enable this setting, and lock the FPS at 60.

Keep this setting at Fullscreen because setting it at Windowed mode will result in performance degradation.

VSync or vertical synchronization eliminates screen tearing by matching the FPS rendered by the GPU with the monitor’s refresh rate. Enabling it will limit the FPS to the refresh rate. I recommend that you keep it on for a better experience.

The lower you drop the setting the lower the render resolution will be. Players will notice degrading image quality as they reduce the resolution scaler. However, It can be really useful to boost FPS.

Increasing the scaler will render the game at a higher resolution and will downsample it to the native resolution. This will improve the game’s image quality at the cost of performance. It depends on the player if they want to reduce the render resolution to boost FPS or to increase the resolution for better image quality.

This option can be enabled to push the graphics settings up a notch while maintaining FPS. However, players might notice when the game drops the render resolution. It depends on the players if they want to use it or not.

Anti-Aliasing eliminates aliasing or jagged edges in-game. This option can be heavy on the performance depending on the option you choose. I recommend that you keep it at Low as it’ll still remove aliasing but the image will look a bit blurry. If you want, you can set it at medium for better image quality but it may cost you performance.

This graphics option in Assassin’s Creed Valhalla is one of the most taxing on the performance. This option controls the quality of objects in the game’s world, how far high geometry assets are loaded, and how much geometrical complexity the objects have. I recommend that you set it at Low.

Clutter controls how far the ground details like grass, bushes, and rocks are rendered from the player. The higher the setting, the higher the distance the players will notice grass and rocks rendered. I recommend that you set this option at medium to save performance for Assassin’s Creed Valhalla.

Volumetric Clouds option controls the quality of the in-game clouds. Increasing this graphics setting will result in Assassin’s Creed Valhalla rendering realistic looking. Clouds. However, it’s one of the most performance taxing options and not really worth it since we won’t be looking at the sky that much. Set this one at Medium.

Environment Textures setting controls the quality of the textures for walls, houses, vegetation, and pretty much all the textures that the game renders except for Eivor. Increasing this graphics setting will use more VRAM. Set this setting at Medium but, players can increase it if they want. Also, setting it at Low will result in noticeable low-res textures while Medium is a good balance.

Character Textures graphics option in Assassin’s Creed Valhalla tweaks the textures for Eivor and other in-game characters. As it’s with Environment Textures, setting Character Textures at will result in serious low-res character models. Medium is a good balance of quality and performance so set “Character Textures” at Medium.

Players will only see this option in play during cutscenes or Panoramic view. It allows the game to focus on characters or objects while blurring distant objects. Of course, this graphics setting can cost performance so I recommend that you disable it. But, if you want to see it then keep it at Low for mid-range PC or at higher resolutions.

This graphics option is most useful at low FPS. It depends on the player if they want to use it as most PC players don’t really like motion blur.

Since Assassin’s Cred Valhalla is a single-player experience, players can lock it at 30 FPS and push the graphics all the way to Ultra on a mid-range PC and the game will still run without any FPS drops. The following are the optimized settings to run Assassin’s Creed Valhalla at 30 FPS.

Other Optimizations And Tweaks

With the in-game tweaks done, there are other optimizations and tweaks that players can do through Nvidia Control Panel and Windows settings that will help improve the game’s performance without much sacrifice on the image quality.

Anti-aliasing-FXAA – “Off”
Anti-aliasing-Gamma Correction – “Off”
CUDA GPUs – “All”
Low Latency Mode – Ultra.
Set Power Management to “Prefer Maximum Performance”
Shader Cache – “On” only if you are using an HDD. Don’t need to enable it for an SSD.
Set Texture filtering – Quality to “High Performance”
Triple Buffering – “Off”
Set Vertical Syn to “Use the 3D Application Setting”

This is an option in the Windows settings that can potentially improve the game’s performance. However, if you are using an old GPU then it’s best to keep it off as it’ll degrade performance instead of improving it.

That is for our Assassin’s Creed Valhalla PC Optimization Guide with tips on how to get 1080p/60 FPS experience on a mid-range PC. If you are facing errors and issues with other PC games or your PC then also see our hub for commonly occurring PC errors and their fixes.