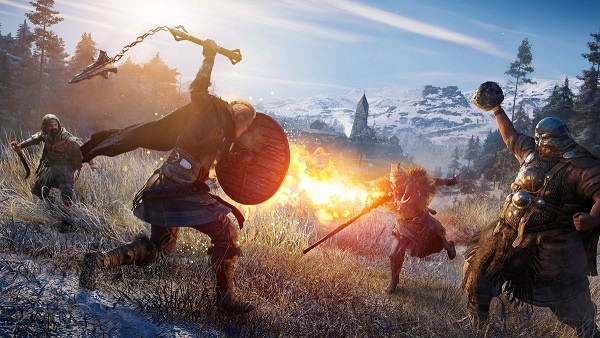 There are a lot of different challenges that players can participate in during the Ostara Festival in Assassin’s Creed: Valhalla. These include brawling, new quests to complete, and an archery competition. In this Assassin’s Creed: Valhalla guide, we’ve detailed everything there’s to know about the Twirling Targets during the Ostara Festival, a few tips, and the rewards associated with it.

To begin, the first thing that players need to do is to speak with Thyra. She should, however, only appear after installing the update 1.2.0. After speaking with Thyra near the Twirling Targets area, begin the challenge.

The challenge basically requires players to shoot at the targets in order to earn points. The targets are color-coded and provide a different number of points i.e. green rewards 10 points, yellow rewards 15 points, and red rewards 25 points. In addition to this, players can also earn extra points by shooting targets before they twirl.

Successfully shooting at the targets and completing rounds will reward players with Ostara Festival Tokens that can be used to purchase different cosmetic items available throughout the event. While the entire thing is pretty straightforward on its own, there are a few that can help players a little:

The most important thing that players need to check is their sensitivity, especially if playing with a controller. Another thing to keep in mind is there isn’t any need to fully draw the bow. As long as the bow is drawn a little, it should work just fine. Players who are playing on PC should swap to M/KB as the accuracy provided by them is far superior as compared to a controller but then again, that’s a matter of personal preference.