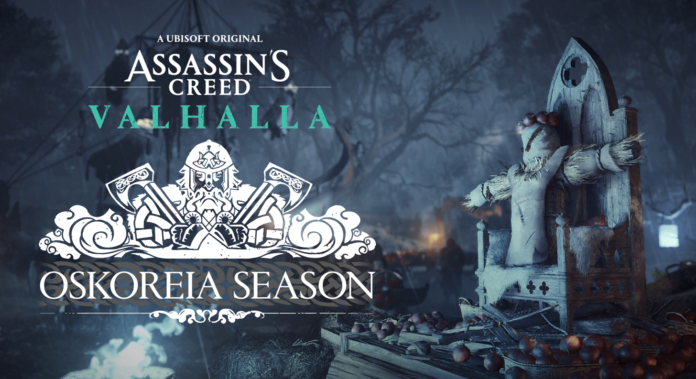 Ubisoft announced that the fourth season is available now for free in Assassin’s Creed Valhalla. The harvest season marks the start of the Oskoreia Festival and Odin’s Wild Hunt, when spirits of the dead rise and savagely hunt the weak among the living. Players will have to defend Ravensthorpe from this harrowing threat and prove the Raven Clan is no easy prey.

In this free limited-time event, players will find new activities and quests, all to reap a wealth of rewards. The Oskoreia Festival will be available from November 11 to December 2. Players must reach England and complete one of the first two narrative arcs (Grantebridgescire or Ledecestrescire) and have a settlement at Level 2 to participate in the Oskoreia Festival.

In the Oskoreia Festival, players will partake in three replayable activities—archery, horseback riding, and a new tournament against spirits. In the tournament, players will be cast into the Veil. Facing the various challenges ahead, from trained warriors to untamed beasts and monsters, players will need to unlock harder levels to put their fighting skills to the ultimate test. The archery contest returns with newly added friendly targets, that will impact players’ progress and keep them away from the highest score. In addition, during Oskoreia’s festivities, new quests will bring the players to meet the Mad Monk and resolve the mystery of a fallen warrior.

Adventure calls and those curious enough to answer will find the all-new Tombs of the Fallen. Scattered across England, these sprawling dungeons will be available from the moment players unlock their settlement, with no other prerequisites needed besides their ability to track them all down. Players will be able to traverse these forgotten tombs for free starting November 9.