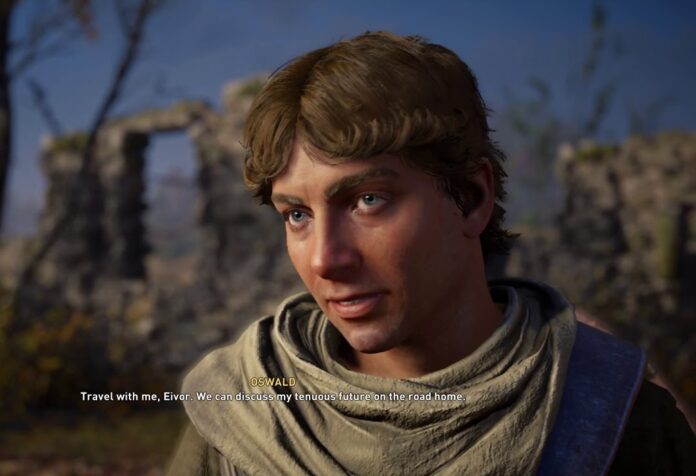 In this guide, we’ll walk you through “Kingmaker” in Assassin’s Creed Valhalla. We’ll explain everything you need to know about this quest including where you can find King Oswald and how you can defeat the Rued Clansmen.

Kingmaker is the first quest of “The Tale of Thegn Oswald” saga. The first thing that you need to check for this quest is if you’ve pledged to East Anglia or not. If you haven’t, simply go to the Alliance Table which is situated in the longhouse in your settlement, and do so, after that you’ll be good to go.

After that, head towards the green objective marker, which, if you open and look at your map, is located in Northwick, East Anglia. When you reach the location, head straight into the building to confront the Danish steward named Finnr. In a brief cut-scene, he’ll explain that East Anglia had no king for a long time and Rued’s clan killed the last king of East Anglia that he appointed. This is the same clan that attacked Eivor’s settlement a while ago.

After this cut-scene, you’ll need to find and speak to Oswald, the future king of East Anglia. You can find him by the arguing crowd just outside the settlement’s walls. After you find Oswald, a brief cut-scene will begin. After the cut-scene, follow him on the horse. On the way, he’ll suspect something’s not right at “Beteleah Farm” and you’ll need to clear out Rued’s Clansmen. Kill all the enemies and then talk again with Oswald.

He’ll invite you to dinner, accept his invitation, and head towards Elmenham. At the dinner, things will get a little out of hand and a fight will erupt between Eivor and the brothers of Oswald’s fiancé. Throw some punches, use counter-attacks and you’ll be able to easily beat them. After you prove yourself to be the better fighter, Finnr the steward will interrupt the fight, another cut-scene will begin and that’s it, the quest “Kingmaker” is complete.

And that’s everything you need to know about Kingmaker in Assassin’s Creed Valhalla.