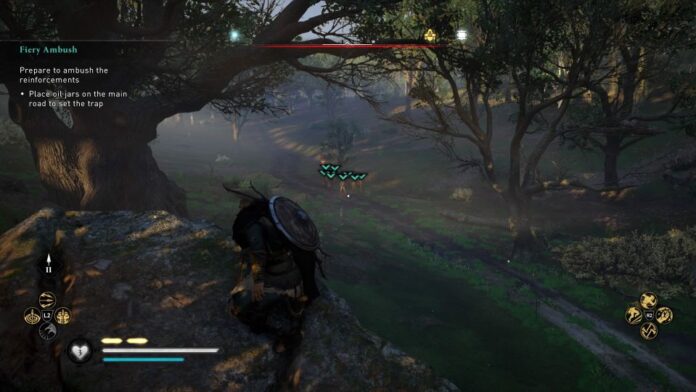 In this guide, we’ll walk you through “Fiery Ambush” in Assassin’s Creed Valhalla. We’ll explain everything you need to know about this quest including how you can help Fulke in negotiating with the oil merchant and how you can ambush the soldiers.

This quest starts right after you’re done talking with Sigurd and Basim in Blood from a Stone. The first objective will be to find and speak with Fulke at Eatun Barn. Simply open the map and look for Eatun Barn in the southwestern region of Oxeneforscire, mark it, summon your horse and head straight towards it. Once there, you’ll find Fulke arguing with a man. Once you’re in their vicinity, a cut-scene will begin.

In this cut-scene, you’ll find out that the man Fulke is arguing with, is in fact the merchant who’s going to provide rations and supplies to Eadwyn, and Fulke is trying to buy that stuff so that it never reaches Eadwyn. You’ll also get three options to choose from; Fight him, Pay him 130 silver or Persuade him if your charisma level is above 2. We chose the third option; Eivor tells him a story about his/her adventure in order to persuade him.

After you’re done with the merchant, you’ll need to place the oil jars, lying around in the area, on the road in order to set up a trap for the incoming soldiers. Once you’ve placed the jars, take your position and wait for your moment. If you strike the jars at the right moment, they’ll take out the majority of the soldiers by engulfing them in flames. You can easily take out the ones that manage to evade the flames.

Once you’ve eliminated all the enemies, look for the supply carts in the area and destroy them using either torch or arrows. There will be a total of 3 of them and destroying them will help you in completing “Chipping Away” because the main objective of Chipping Away is to weaken Eadwyn’s hold in Oxenefordscire. After you’ve destroyed the carts, speak to Fulke on the hilltop to conclude Fiery Ambush.

That’s all you need to know to complete the Fiery Ambush in Assassin’s Creed Valhalla. If you need more help check out Chipping Away, A Fury from the Sea, and The Saga Stone walkthroughs.