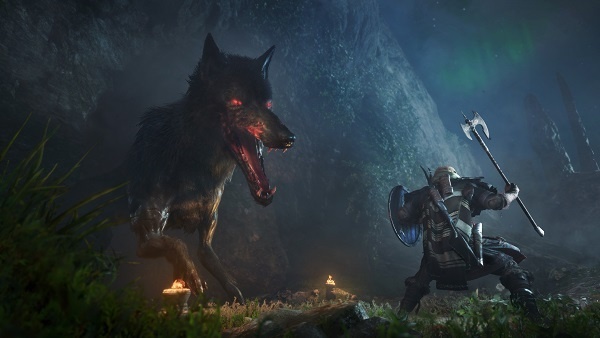 Once you manage to build Hunter’s Hut you can start hunting legendary animals of Saxon England. The Corpse Feeders legendary hunt is one of the first three you come across in Assassin’s Creed Valhalla. During this hunt, you go head to head with a pack of wolves and they are pretty hard to take down.

You can find the Corpse Feeders in Oxenfordscire, northeast of Buckingham. Find a walled-off area of the buildings with dead bodies around them. As you approach the area a cut-scene will play out and the fight with the Corpse Feeders will begin.

How to Kill the Wolves in The Corpse Feeders Legendary Hunt

The fight with the wolves is pretty hard so if you’re not prepared you will die. As soon as the cutscene ends, you need to be ready for the fight immediately. They will jump at you and multiple wolves can attack at the same time. Dodge out of their way and try to isolate each wolf and go for the kill. There are three wolves and you need to kill them all to complete The Corpse Feeders legendary hunt.

The Hwit Wulf is white and is the first one to attack you on the rooftop. This wolf is fast and can knock Eivor down with ease, giving others the opportunity to bite off Eivor’s head. To kill the Hwit Wulf jump out of the way when pounces on you and perform a couple of quick attacks. Don’t get greedy with your attacks. Use your fire arrows to target Hwit Wulf’s weak points and wait for an opportunity to attack.

When you kill Hwit, the Niht Wulf will jump on the roof and let me tell you, the battle with the Niht Wulf isn’t easy. Niht Wulf tries to grab your head all the time, if you are caught in its jaws, press the light attack button as fast as possible to get out of its jaws. The process of killing the Niht Wulf is the same as Hwit. Jump out of the way and land a couple of light attacks. Use fire arrows to create an opening and then attack at the right moment.

The last wolf you need to kill is the Eald Wulf. It is huge which means it can’t come up to the roof. You can use arrows to chip away at its health but they will take a long time and a lot of arrows. When you finally decide to jump down to face it, you will notice that its attacks are slow but do not underestimate the damage it can do. When you see an attack coming, simply dodge out of the way and try to land a few hits. Do not get greedy because the amount of damage it can do is lethal. Try to avoid creating distance between you and the wolf because it will charge you with an extremely powerful attack.

When you kill the three wolves you get the Skratii Scheme (Arms) tattoo. Visit the Hunter’s Hut to get your reward.