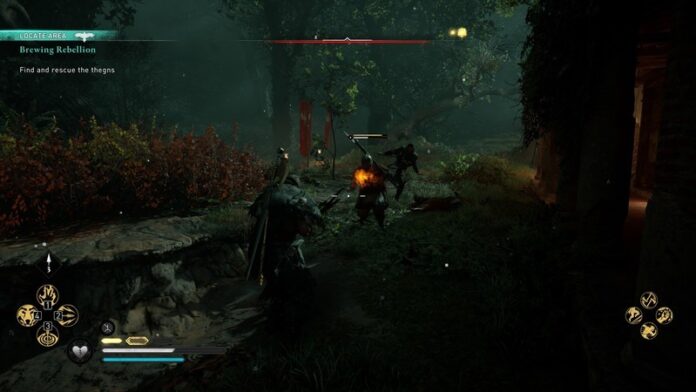 In this guide, we’ll walk you through “Brewing Rebellion” in Assassin’s Creed Valhalla. We’ll explain everything you need to know about this quest including where you can find Sigurd and how you can rescue the prisoners at Leah Villa Garrison.

Brewing Rebellion is the first quest of “The Paladin’s Stone” saga. You’ll need to pledge to Oxenefordschire first in order to start off this saga. You can do so by going to the Alliance Table which is located in the long house of your settlement. Once you’ve pledged to Oxenefordschire, Randvi will set you off on the quest. The first objective will be to find and talk to Sigurd, who’s in Buckingham 2200m away. Simply get in your long boat and follow the river to reach your destination.

Once you’ve reached Buckingham, go straight to the alehouse where Sigurd is waiting for you. You can use your Raven to easily find it. When you get into the alehouse, you’ll find out that Sigurd isn’t there. Then you’ll need to talk to people there in order to gain some information. If you talk to the woman cleaning the tables, she’ll tell you that a fight broke out and Sigurd fled the alehouse with his companion. She’ll also tell you that she knows where Sigurd is and will ask you for something in exchange for that information. You can either pay her 130 silver, threaten her or persuade her if your charisma level is higher than 2. She’ll tell you that Sigurd escaped through the window towards the river and is probably hiding in one of the fish houses.

Then, you can use your raven to identify Sigurd’s location. Once you identify and go to Sigurd’s location, a cut-scene will begin and after some catching up with Sigurd you’ll need to go to the longhouse of Buckingham; just follow the objective marker. The door will be locked and you’ll need to force open it using Sigurd’s help. If guards are on your tail, kill them first as otherwise Sigurd will be busy fighting them. Once you open the door, another cut-scene will begin following which, you’ll have to clear the area by killing all the enemies.

Once you’ve done so, another cut-scene will begin in which Geadric tasks you with rescuing the thegns at Leah Villa Garrison, southwest of Buckingham. When reached there, all you need to do is to find and rescue the thegns, who’re about to be executed. You can either do that in stealth mode or by taking the enemies head-on with your axe blazing. If you choose to do the latter, watch out for these lines; ‘Execute the prisoners at once’ or ‘Kill the prisoners now’. If someone utters these words, rush to the objective marker representing the prisoners and take out the executioner. If you don’t, there’s a good chance he’ll kill the prisoners while you’re fighting the enemies and all your efforts will be wasted.

When you free up the prisoners, they’ll fight alongside you and you’ll get the objective to escort them to safety; follow the objective marker. Kill all enemies in your way and if one of the prisoners is knocked down, you will need to revive them. After you’ve escaped to safety with the thegns, another cut-scene will begin to conclude this quest.

That’s all you need to know about the Brewing Rebellion quest of Assassin’s Creed Valhalla.