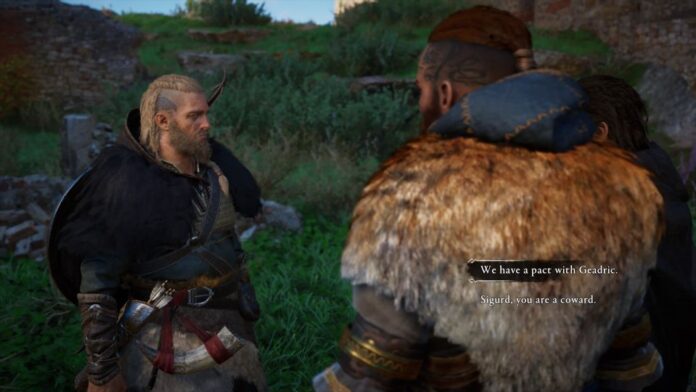 In this guide, we’ll walk you through “Blood from a Stone” in Assassin’s Creed Valhalla. We’ll explain everything you need to know about this quest including where to find the secret door at Evinghou Tower and how you can take out Eadwyn’s men.

Blood from a Stone is a part of a singular parent quest called Chipping Away in The Paladin’s Stone saga. It starts right after you talk to Fulke at the stables in the previous quest; Pilgrimage to St. Albanes. In the stables, cut-scene Fluke and Sigurd talk about a mysterious and ancient stone that Sigurd is substantially interested in. After that cut-scene, the quest is complete and Blood from a Stone begins. The first objective is to follow Fulke so Sigurd can see the stone for himself.

Fulke will take you to some old Roman ruins called Evinghou Tower, once there follow Fulke up the ladder and she will take you to a room in the tower. There you will need to find and open the secret door. To your left, there’ll be a moveable cargo rack. First, destroy the box to its left using your axe and then you can slide it to the side to reveal the secret door. Inside, you’ll find that Brother Paul is dead and Eadwyn has taken the Saga stone.

Eadwyn will arrive along with her men and try to cut a deal with Sigurd for the Saga stone. Eivor will then lose control due to lack of information about Sigurd’s true intention and attack one of Eadwyn’s men. You’ll then need to kill all of them. You can do it quite easily since they’re all standard enemies and the only tougher ones among them are 3 standard-bearers but don’t worry, Basim, Fulke, and Sigurd will be fighting by your side.

Once you’ve cleared out all of Eadwyn’s soldiers, another cut-scene will begin. In this cut-scene, you’ll get options to choose from which include; “Punch Basim” and “Punch Sigurd” as Eivor talks with them in a heated argument.

We do not recommend punching either of them and choosing the alternative because punching them can potentially affect your relationship with them and hence the outcome of different quests. And that can prevent you from reaching the true ending to the story. This cut-scene concludes the quest.