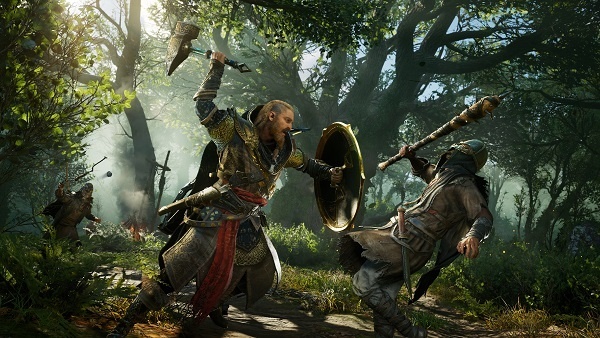 Assassin’s Creed Valhalla has a skill tree that allows you to put skill points in skills to unlock more covered in fog. One of those skills sections is the Wolf Tree which revolves around the range. In this build, you will have to stay close as most of your skills are made for combat from a range. Unlocking more skills will make more constellations available for you. Here are all the skills in Assassin’s Creed Valhalla in the Wolf Tree and our picks for some of the best ones.

The following is the complete list of Wolf Skills in Assassin’s Creed Valhalla.

Sprint Attack – Press R1 while sprinting to do a sprint attack.

Emergency Aim – Holding L2 will snap your aim to the enemy as they detect you, giving you an opportunity to kill them and remain undetected.

Last Chance Healing – When your health reaches a critical state, time will slow around you, allowing you to flee or heal.

Battleground Bolt – Press E to pick up the nearest discarded weapon and automatically throw it at an enemy in sight.

Stealth Adrenaline – While in stealth, gain adrenaline by looting a chest or pickpocketing in a restricted area.

Hunter Bow Combo – Release your arrows as you finish drawing it to make the next one draw faster.

Grit – Regain the red portion of lost health on your bar when landing successful melee attacks.
Charged Shot – Fire two fully charged arrows with the Hunter Bow in an attack that cannot be cancelled.

Arrow Reinforcement – Loosed arrows will never break and may be collected from fallen enemies.

Based on the information above it shouldn’t be hard to decide what the best Wolf Skills are. The best Wolf Skills are subjective for each player of Assassin’s Creed Valhalla. But if you need my suggestions, go with Emergency Aim, Bow to Melee Link, Arrow Reinforcement, and Sprint Attack. You can also check out the best Raven Skills in Assassin’s Creed Valhalla.