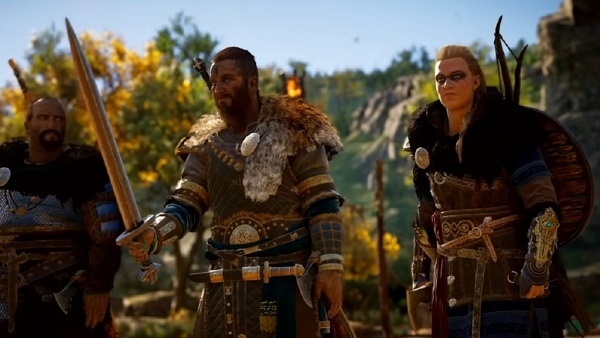 In this guide, we’ll walk you through “A Triumphant Return” in Assassin’s Creed Valhalla. We’ll explain everything you need to know about this quest including how you can find Rued’s scout and also how you can defeat his clansmen.

A Triumphant Return is the third quest in “The Tale of Thegn Oswald”. You can start it by finding and talking to Oswald. Just follow the objective marker and you’ll find him standing by the longships. For your ease, you can always scout the objective location using your Raven.

After you finding Oswald and a brief cut-scene, you’ll be tasked to find and defeat one of Rued’s scouts. 3 of them will be scouting the outskirts of East Anglia and you’ll need to find and defeat just one of them. You can use the Raven to scout the area and then your pulse to identify the enemy once you’re in the area. After beating one down, you’ll need to tie him up and carry him back to Oswald; he’ll still be at the same location.

After you bring the spy back to Oswald, another cut-scene will begin and you’ll get some dialogue options to choose from (to help Oswald). Whichever ones you choose, it doesn’t matter because the outcome will be the same. In this cut-scene, Oswald decides to take Rued head-on and you’ll get a new objective to meet your allies outside a nearby fort.
After meeting the allies, you’ll need to clear the fort of Rued’s men.

If you want the Viking vibe, you can take them head-on with your ax flashing. On the contrary, if you want the classic assassin vibe, scout the fort using your raven, sneak in and then pick your enemies one by one. All the enemies are standard and you’ll be able to kill them easily, except one, the Woe-Bringer. The woe-bringer is a colossal Norseman with a giant axe. His sweep attacks are quite powerful so dodge these at all costs. After a bit of dodging and counter-attacks, you’ll be able to bring down his stun bar and eventually kill him.

After eliminating this foe, just follow the markers, explore the fort for treasure and eliminate all enemies on your way. After you’ve killed every single one of them, you’ll get a new objective to light up the brazier. Following the objective marker will lead you to the brazier on a cliff which you can then light up using a torch.

Following a cut-scene showing Oswald’s dramatic duel with Rued, you’ll need to escape the fort with your allies. You can run straight out of the fort without worrying about the allies as they’ll all meet you at the rendezvous point.