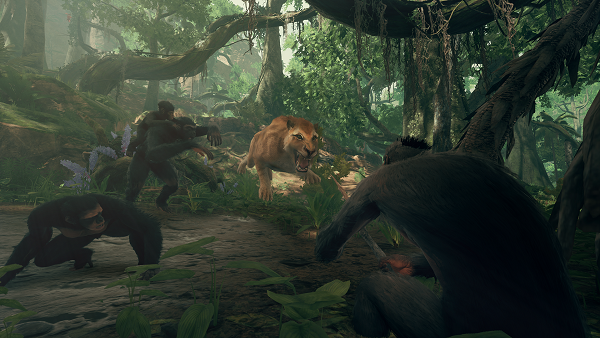 Ancestors: The Humankind Odyssey is a survival game where you do your best to evolve and not die. Facing predators in such a game can become daunting at the time, especially when you are just starting your evolution journey. However, with a little information and guidance, you can do well in combat. Our Ancestors: The Humankind Odyssey Combat guide will you understand the game’s combat mechanics and tell you the best ways to survive.

The combat basics aren’t hard to understand since all you need to do is hold down a button to attack and dodge. You just need to time it right and you can dodge enemy attacks.  Here is the game’ button layout for all platforms.

Hold down the dodge button when you are being attacked and move your controller joystick or keyboard (WASD) to dodge right or left. The timing must be right and this part is a bit tricky. You need to make sure you track the audio cue which sounds like a chime/bell.  Hold down the button when you are being attacked and as soon as you hear the audio cue, release the button to dodge. If you are carrying anything in your hands, chances are you will end up dropping it for a successful dodge. You can unlock nodes to make sure you don’t drop valuables when you dodge.

Now that you understand how to dodge, it shouldn’t be hard to understand how to attack. The process is pretty similar to dodge. It is best to use a weapon to attack otherwise a bleeding debuff and damage can hurt you bad. You can create simple weapons from various items The Humankind Odyssey. Use rocks and dead branches to craft Sharpened Sticks. Use this basic weapon until you evolve enough to craft more powerful weapons.

Hold down the attack button and look for the audio cue. However, this time move toward the enemy to attack when releasing the button rather than away from it to dodge.

If you are facing predators you can attack them to retreat from the area and be out of sight. Smaller animals like boars and snakes usually run off but often attack again if you go near them.

If you need more help with the game check out best early weapons, constructions, and crafting tools.