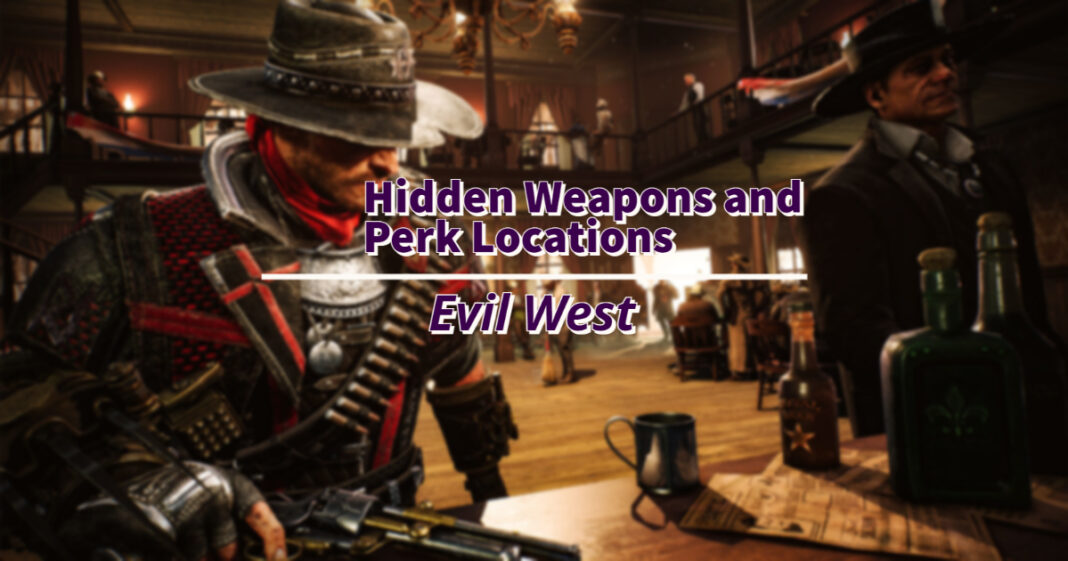 In Evil West, you must upgrade your weapons to gain an advantage over your enemies, obtain perks that will help you level up quickly, and acquire powerful abilities. In this guide, I’m about to reveal all the insider information on locating powerful weapon upgrades and perks. With two top-tier weapon upgrades plus eight potent perks tucked away in Evil West. Some of these are game-defining secrets that can give you a major boost in power – so don’t miss out!

Reach Level 5, also known as Devil’s Pass, to unlock the ‘Booming Business Perk.’ This perk not only allows you to explode TNT explosives crates, but it does so with a staggering 50% increase in their radius of destruction! You can’t overlook this hidden gem.

As you battle against werewolves who once were humans, remember to look for and interact with the chest on your left side; this will give you a chance to upgrade and improve your performance. While this perk may not be as potent as other bonuses that can work with or without Devil’s pass, it should still contribute significantly to your gaming experience.

Activate Lethal Height and watch your opponent receive an additional 25 points of damage in mid-air as they move toward you. This perk is similar to the well-known Ghost Gate, making it easier for you to win the game with less effort. To find this perk, make your way to the RI remote post and be prepared for a leech that will break through the tunnel and come at you. To defeat this creature, it is best to stay on its left side during combat. Eventually, you will be forced into a small space as if being crawled there by an invisible force- continue fighting until victory. The chest’s location will soon be revealed as you actively engage again. Plus, there is no need to worry about leeches or other dangerous creatures lurking in this area.

To unlock the “Boom Ball Perk,” found on Smoke and Mirrors, Level 7, you must journey through the deep forest. Follow a precise path of trees to reach your destination before battling with the boss. If you carefully chart a course through the trees, then an elusive chest will be revealed after trimming or burning some of them away. With Boom Ball, you’ll have access to a special perk that applies HP and power to your rifle or explosives. This is exceptionally advantageous since it functions like miniature TNT explosives, causing massive damage to enemies. Lastly, it is associated with the Booming Business perk.

Once you reach Level 8, the perilous Adrenaline Junkie Perk will be unleashed! Test your puzzle-solving skills as you attempt to rearrange and stack large blocks to progress through this thrilling challenge. To locate the right pathway accurately, ascend to the upper floor and carefully examine your choices. On both sides of the block handle, that will help you move them around. Uncover the concealed chest by searching on the left side – it may take some effort, but it will be worth it in the end.

When HP pickups appear for you, this chest will convert them into energy pickups that can help replenish your reserves quickly and easily. This perk is incredibly advantageous for gamers, allowing them to perform strenuous and energy-draining attacks. Many players use it as a handy tool to easily complete their missions.

As you reach Level 9, the Bursting Bolts weapon upgrade takes on a particularly tart flavor – tasting distinctly of blood. If you’re a gamer who favors crossbows over rifles, then this weapon upgrade is essential for your gaming experience. It allows you to shoot double bolts instead of semi-automatic rounds with increased accuracy and power. You’ll have to climb a ladder to obtain the chest and defeat the mini-boss.

After that, the ground will start burning beneath your feet until you fall into an oil field. Once there, look for a charred bush and rejoice – you’ve found what you were searching for! Now take advantage of all its upgrades on your arsenal before continuing onward.

To obtain the Healthy Lifestyle Perk, traverse to the Bats in the Belfry on Level 10. This benefit’s main utility is converting an NG pickup into an HP pickup every time it appears. You get to decide whether you’d prefer the adrenaline rush or its antithesis so that you can pick whatever fits your playing style the best. HP Boost can help you get healthier, and Energy Pickup will give you more power.

To receive this benefit, keep up the level, ascend into the arena, and trip three switches along your path. When these are tripped, a new area opens up for exploration. When you’re shooting all the switches, take note of one that has chains attached. You can climb up with them, and your reward awaits when you get to the pathway.

As soon as you begin playing Man of people, level 11, you will find the Work-Life Balance Perk. As soon as the level begins, a tower rises before you. The only way forward is to ascend this great structure and reach its peak. Resting at the top of the Tower awaits your prize – a chest filled with all your journey has earned you. This incredible perk is sure to satisfy you – it gives both HP and energy in equal amounts, no matter if your pick-up was a health or an energy one. Therefore, 25% of each pickup will be balanced into HP and Energy.

You can find Life Support on the Old Friends at the 13th level. This perk is designed to improve your overall health and well-being, thus increasing your HP. The perk’s system would give you total invulnerability as long as your work is efficient and operating. If we estimate the time, it runs up to 90 seconds of absolute HP capacity. You’ll come across a perilous floor to obtain this reward, and some pathways on the ground will be elevated. By shooting these tiles, you can eventually maneuver along a pathway closer to your loot chest.

On the Sun’s Duty, Level 14, you will find The Tool Down. When you pick this perk, the cooldown of your powerful Crippling Rod is diminished. This advantage is particularly beneficial when combating airborne enemies that drop pickups – enabling you to kill them before they get away quickly. Once you begin level 14, traverse the webbed area and veer to your right upon exiting. You will then notice a chain that needs to be shot – use it as an anchor point to ascend, and before you know it, the perk chest is in plain sight.

The Fire and Forget is a game-changing weapon upgrade featured on Level 15 of the heist. This revolutionary Gatling gun attachment enables players to extend its functionality by 25%, making it an invaluable asset in any mission. Although it can be difficult to find, so the gamers might not be able to acquire this perk first try. Unlike other perk crates, you won’t need to scale up using chains – this one is tucked away behind a wooden chest. An exciting reward awaits as you move through the level, vanquishing every adversary in your path. Once at the stairs and up to the next floor via chain linkage, press on until you reach a treasure chest holding your desired reward.

That’s all you need to know about the perks and weapons upgrades in Evil West. With these fantastic weapon upgrades and perks, you can further level your character, making progress to higher levels much easier! If you want to read more about Evil West, here are some guides you might like: