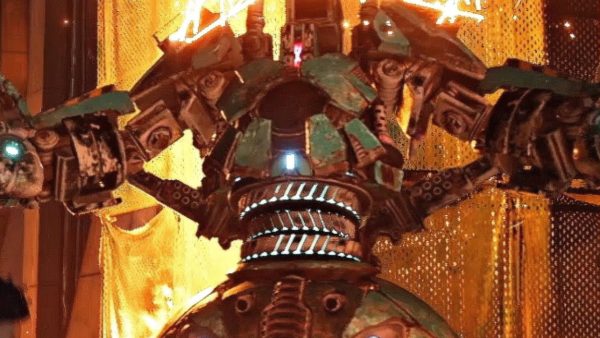 Our Final Fantasy 7 Remake guide will help you with how to beat the Airbuster as he is one of the toughest and complex bosses in the game.

There are a total of six Reactor 5 keycards and each of them plays an important role. Each of the keycards can be used to strip Airbuster off of its attacks and abilities and retrieve them yourself.

Removing M units will grant you random items that you can pick up before the fight. To put it simply, find and use the keycards to reduce Airbuster’s effectiveness.

As the boss fight starts, Cloud will be facing the Airbuster alone as he will be separated from Barret and Tifa. Defensive posture is necessary here, block his gunfire and laser beam attacks using Guard stance but dodge the EM Mines.

Try to get close and use melee attacks but don’t stick around close to him for long as Airbuster will use a blast of static electricity.

Otherwise, use spells and as I mentioned earlier, Airbuster is weak against lightning so use lightning spells. Keep using the Lightning spell and it’ll stagger for a short while. Use ATB abilities to deal significant damage.

Keep the defensive posture and damage the Airbuster when you get the chance. Keep doing it and the Airbuster will turn and his focus towards Tifa and Barret.

Cloud has the opportunity to get close and land combos to deal damage. However, its jets will fire periodically and will knock Cloud back so keep an eye on it.

As the Airbuster hits the second phase, he’ll bring out his Tankbuster laser and will shoot it down the central catwalk.

Whatever you do, don’t get hit by his laser as you’ll lose a lot of health. Airbuster will now use the tankbuster laser from time to time.

In this phase, get close to the boss and use melee attacks and lightning spells. Deal enough damage and Airbuster’s arms will split, firing arcs of electricity between them.

Shift your focus to one of the arms and destroy it quickly with Barret’s ranged attacks. The arms will also move to the other catwalk and will try to punch you. Try to dodge this attack.

Hit them hard and Airbuster will pull the arms back and keep on hitting it with lightning spells and melee attack. Try to stagger it and then use your combos to land some serious damage.

When the Airbuster has half of its health remaining, the next phase begins. The boss will now hover to the side of the catwalk and melee attacks are useless at this point.

Use Barret with this ranged attacks and support him with Lightning Spells. When the Airbuster returns to the catwalk, rush it and use melee attacks.

In this phase, the boss will rise up either to hit with a big punch and then use its machine guns to multiply the damage or to use flame thrower from its palms. It can also use the Tankbuster laser while spinning.

Just dodge when you see him using these attacks and keep using Lightning spells to chip away its health.

As the boss’ health is about to deplete, it’ll use the Big Bomber which fires a giant grenade. However, you should be able to defeat the Airbuster by relentlessly damaging it.

That is all for our Final Fantasy 7 Remake guide on how to beat the Airbuster. For more on the game also see our Summons Locations Guide and Enemy Skills Locations Guide.