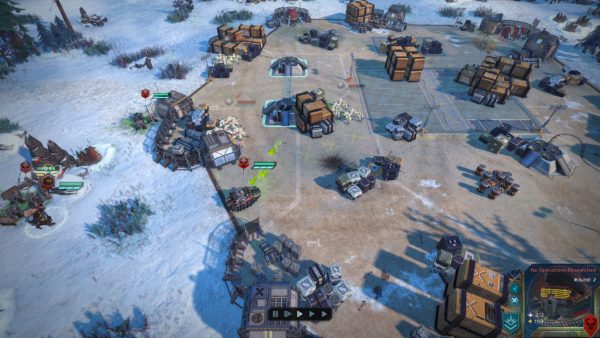 What good is a grand strategy 4X-styled game without a few NPC factions to sprinkle your randomly-generated world with a little bit of unpredictability and a sense of progress? Much like the City States in the Civilization series, NPC factions in Age of Wonders: Planetfall interact with the player variously and provide different options in how you want to deal with for bonuses to your empire, be them resources or political. Here is a list of ways that you as a player can interact with an NPC Faction:

As you expand your empire across your world, you will inevitably run into one or more of the many NPC factions. Let’s assume that you are a peaceful empire and not at all interested in looting and pillaging (pfft..sure) so you decide to approach these newfound life forms in a friendly manner which then allows you to perform quests for them.

When completed, improve relation and influence which you can then use to ask faction armies to give up important structures for you to use. Each NPC Faction has its own set of quests and its unique narrative flavor.

War – What is She Good For?

Let’s now assume you decided to be yourself and decide to show these miserable cretins a thing or two. If you decide to remove an army belonging to an NPC faction by force, you effectively have declared war with the entire faction and will take a hit on your global reputation.

Be careful not to start too many NPC wars as their bases and dwellings will start to spawn invading armies en masse and your colonies might be overrun quite quickly.

Just like AI Players in Planetfall, NPC factions will lay claim to unowned Sectors around their habitats (bases). And even if you try to avoid them, conflicts of interest with your NPC neighbors will soon start to appear: if you settle in sectors next to their dwellings, they will have an issue with that and your relations with them will take a hit.

NPC factions will at times make demands based on their relationship with you and based on the stage of the game. If you made any small offenses earlier, they can be made right by payments in one of the key resources.

Although demands can escalate and could include demands that you hand over sectors to them. If you decline demands, relations will go further south and you are at risk of attack. Ungrateful factions, I swear.

Just like its predecessor, there are unit stacks garrisoned at NPC dwellings, and also ones that are patrolling territories. This time around NPC factions will also launch invasion attacks.

This is almost always associated with an event. An extreme version of NPC attack events are boss events, extra-strong armies that have named Boss characters with high-level unit mods and henchmen.

Each NPC Faction has at the very least 5 unique units, including one that is Tier IV alongside a set of unique Mods and Operations that you can acquire from them. Depending on your relationship level with the respective NPC faction, you can recruit NPC Units as auxiliary forces.

The higher your relationship, the higher the level of unit you can recruit. Recruitment of units in this manner costs additional influence.

The ultimate goal for if you are maintaining a friendly relationship with NPC factions is annexing a faction’s Dwelling to your city. These dwellings have resource yields comparable with the Golden Landmarks (the highest-level economic structures in the game), and (once annexed) the units of the particular faction are unlocked for native production for your empire.

Naturally, this is not all NPC Factions are for. You can mess with the NPC relations of other players through the use of Covert Ops and they will play a role in achieving particular victory conditions for your empire.

This list should provide with the core knowledge of how NPCs interact within Planetfall. Now get started on that subterfuge and recruit a few defectors from the troubling natives and ensure the expansion of your empire at all costs! See you planetside In Age of Wonders: Planetfall.