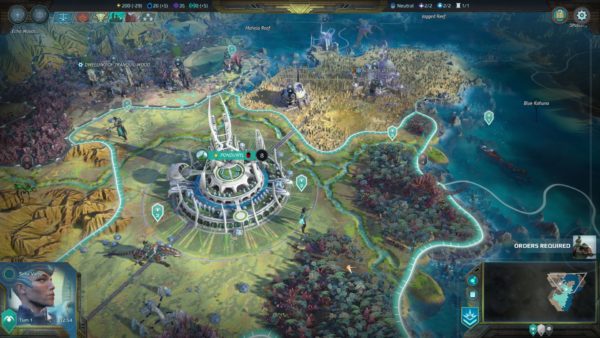 Resources are at the forefront of every flourishing community in Age of Wonders: Planetfall. Stacking up on these currencies and attributes will dictate the happiness of the population of your settlement, the morale of your military units and fruitful diplomatic relations with other factions.

Though some resources are acquired as part of quest rewards in the main campaign objectives or via side-tasks offered by other factions, others will require you to annex lands and harvest nodes/caches to acquire valuable materials. It’s highly encouraged to scrounge uncontested territories to obtain valuable resources. A Scout unit or one with high movement points can carry this task out with high efficiency.

It goes without saying, but having alliances and pacts with other settlements will let you in on precious resources as part of the trade deals. It is thus necessary, to opt for a diplomatic approach with different factions to further your research and development. Ultimately, this will result in higher production of local resources saving you from being over-reliant on support from foreign partners.

Listed below are the essential global resources, some of which are returning from Age of Wonders III, along with a few new additions.

Energy is the main universal currency in the game. It is used for the production and upkeep/maintenance of units, colony structures, unit modules, and operations. Energy is generated by your colonies and no empire can go without it. Energy can be traded and can be found as nodes and pickups on the map.

This rare material has an origin beyond the void and is required for advanced units and unit modules. Cosmite is mainly gained from map nodes or creates. The rarity of this material means that high tier units can’t be mass-produced and Sectors containing Cosmite are highly contested.

Influence is the diplomatic currency used to manipulate other players and NPC factions, it can be used for things like asking NPCs to surrender locations, hire NPCs mercenaries, and to make diplomatic pronouncements. Influence is gained by performing Quests and from an inherent generation of your empire. Cooperative Doctrines and friendly play styles give bonuses on Influence generation.

Your reputation determines how other Empires and NPC factions see you. Reputation modifies your Influence gain and Global Morale. Reputation also influences the opinion of the individual units within your settlement so this affects their happiness directly. A high reputation level greatly favors the costs of Dwelling shops.

Similar to AoW3’s alignment, your Reputation is influenced by your in-game actions. Being in certain diplomatic states also greatly boosts your reputation. For e.g. the Alliance diplomatic state increases your total reputation by 150. Other factors which modify Reputation positively include offering gifts to other factions, listening to their demands and completing their quests and handling outpost events.

Knowledge is used to rediscover and apply the lost technologies of the Star Union. You might notice there are two Research like slots in the top bar of the latest screenshot, more on this later!

After feedback on AoW3, we’ve decided to split “Casting Points” for Planetfall in two. Tactical Operations Points are used to launch the Operations (Airstrikes, Psi Storms, etc.) you can call in during tactical combat, when a battle takes place within your Operational Coverage. Your tactical operations take one turn to prime at the start of each combat before you can launch them, and you first need to have enough Tactical Operation Points, energy and Operational Coverage.

Doctrines are special sustained operations which positively affect the society and military of the empire. A doctrine is acquired by researching the Doctrine Tech Group, purchasing them from NPC Factions, or annexing gold and silver Landmarks. Once you’ve obtained them, you need to prime them by spending Strategic Ops points along with some Energy.

These can then be placed in doctrine slots. Essentially, doctrine slots determine the number of global doctrines you can have active at once.

The overall morale of your empire affecting Unit Morale and the Happiness of your colonists. It is influenced by the wars you enter and how justified they are perceived to be.

Also, check out our Tips and Strategies Guide and Modding Guide.