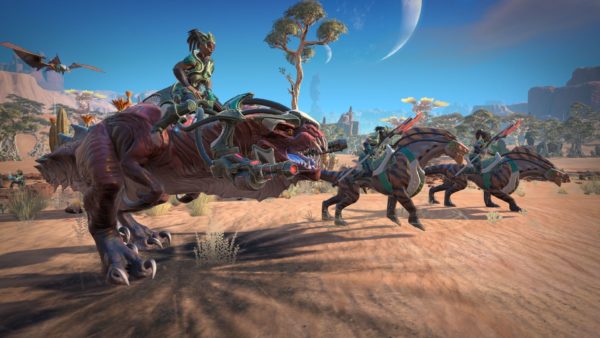 Choosing a starting race or faction can be quite the decision, as each group has its unique mechanics, attributes and weapons. There are a total of 6 Factions in Age of Wonders: Planetfall and we’ll break down each one of them below in an attempt to let you decide which one will suit your play-style.

Though each of the factions in Age of Wonders is unique in how they view other races and plan their invasions, there is some common ground when it comes to their backstory. All of the factions had to deal with the collapse of the Star Union, their one true kingdom. Now each one must find a new home in lieu of survival. This shared history or ultimate goal, as the developers’ state, is a unifying factor between the 6 factions.

In addition to the unique unit lineup and weapon groups (damage channels) for the factions, each race has their unique technology tree. Each Race has 8 unique units along with 2 different Racial Ships and a common Colonizer. Moreover, each race has 8 Race Unit Mods attributed to them along with special Operations, Buildings and Social Doctrines.

Learning Secret Technology can further diversify the factions as you unlock more unique Mods, Units, and Operations. If you’re successful in the Secret Tech tree, you’ll be granted the vastly powerful Doomsday weapon, which again is unique to different Secret Techs.

Depending on the race, weapon types and secret tech developed, Tech Paths open up granting your more unique items and content. This allows you to explore even more options with this new Composited Tech Tree mechanic.

At the end of the day, you have 6 diverse group or play-styles to choose from which are sure to offer you 6 unique experiences in Age of Wonders: Planetfall. Perhaps, you might want to replay the campaign with a different Faction, making the whole experience fresh again.

Let’s now look individually at the 6 classes all of which are available right from the start in Age of Wonders: Planetfall. Note, these are the only playable factions. There are several other NPC factions which are responsible for other challenges and serve functions like handing out quests.

The Amazon was deep into genetic research and modifications before the collapse of the Star Union. In addition to creating laser-equipped Tyrannodon, they modified their existing soldier-warriors to have extraordinary abilities like those of pterodactyl scouts called Shrikes.

They are an all-female faction that can control wildlife and the wilderness. This faction is similar to how Hunters or Elves work in other fantasy mediums thanks to their bow skills, exploration techniques and closeness to nature and animals which they keep as their pets and assistants.

Their weapon technologies revolve primarily around the Biochemical and Laser damage channels.

The Assembly race started as computer-powered clones created by a company that was no more after the big event that shaped the universe of Age of Wonders: Planetfall. Still having human minds but everything else crafted out of metallic bits, they started down the road of becoming the ultimate killing machines.

Units in the Assembly represent Cyborgs who take a keen interest in tinkering with the modifications and technology responsible for sustaining life. For this purpose, they harvest the useful organs and parts from their enemy corpses. They’ve taken up the task of repairing their fellow Cyborg units as a profession and duty. This is exemplified by Scavenger Units who use the bits of their enemies to heal themselves and Reverse Engineers who can revive their comrades in battle.

Their primary weapon groups include Arc and Kinetic powered equipment.

Dvar are the hardworking industrial-minded dwarves in Age of Wonders: Planetfall. Thanks to their experience of working in harsh conditions in mines, they were able to develop strong armored suits post-collapse.

Thanks to this specialization in machinery, they can withstand uncompromising terrains like Volcanic areas, and terraform mountains to make them flat. They can erect cover for their defense and have an array of lethal melee weapons and durable vehicles.

The Dvar race makes use of Explosive and Kinetic as their main weapon groups.

Kir’Ko is the only faction comprised of Aliens while other races are humans or humanoids. Before the collapse, they were connected and unified by a single hive mind. However, they were also enslaved by superior human species. Now they’ve broken their chains and their goal is divided into two objectives: to take revenge for their enslavement and to get back to their hive queen.

Gameplay-wise, the Kir’Ko race are strengthened if units are close to each other. The higher the number close together, the stronger the swarm grows. This buffs their melee damage (a toxic spit) and ranged attacks. They can also summon terrifying aquatic beings and flying monsters via the special Larva units.

Biochemical and Psionic are their main damage channels when it comes to the primary weapon groups.

The Syndicate Faction were noble and blessed with wealth which they used in the post-collapse world to become slavers. Thus, their military units comprise of slaves fighting for their freedom.

They are also ones who will first strive for diplomacy when others wouldn’t. Their other strong suits include stealth and espionage. On the battlefield, this is demonstrated by invisible suits and cloaks, close-ranged daggers and teleportation abilities.

The Syndicate faction makes use of Arc and Psionic as their go-to damage channels.

Vanguard is the most straightforward class in the game. They started as normal human space soldiers who were tasked to build a hyperspace portal. However, waking up from their cryosleep they could see the world they left behind was lost and their masters destroyed.

The faction also works as the introductory race that puts you in their shoes for the story for the most part and let you play tutorials through them. Equipped with long-range rifles, attack choppers and gear enhancements like jetpack, drones, and turrets, Vanguard is the well-rounded assault class. The Vanguard faction specializes in Kinetic and Laser Weapon groups.

For more help on Age of Wonders: Planetfall, be sure to check out our Console Commands Guide, Colonies Guide, and Modding Guide.

This is all we have in our Age of Wonders: Planetfall Factions Guide. If you have anything else to add, be sure to let us know!