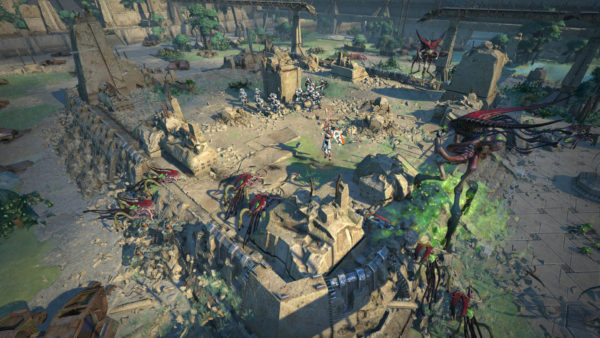 The Diplomacy system, popular to the Age of Wonders series, has been revamped to include more exciting options. Tied closely to this system, is an array of decisions which will dictate your potential alliance or rivalry with the other group. Down the road, these could lead to the facilitation of trade between the two sides or a huge conflict. Learn all about the Diplomacy system of Age of Wonders: Planetfall below.

At its core, Age of Wonder: Planetfall is all about strategically striving for survival and development of your faction. To make these possible, you’re prompted to explore options with other settlements and races, as you trek along with the different planets.

Previous installments in the series had little in the way of actual decision making when it came to this system. War and alliance were black-and-white elements which not much ground between these two extremes. Planetfall introduces new mechanics that create for multiple opportunities giving more facets to this system, be it in relation with NPC factions or real players.

Why Diplomacy is Important in Age of Wonders: Planetfall?

As you venture out into the unknown and encounter different settlements in the game, you can strike deals and pacts with these factions. These treaties ensure both of the sides can engage in a healthy and fruitful trade relation with resources being distributed to favor both the parties.

It won’t always be easy to strike a pact with a different faction since some settlements are only driven by the idea of “conquest” and will stop at nothing to make other settlements their own. These are NPC groups which are hostile by default. Other groups will jump on the friendly bandwagon immediately but require you to complete certain tasks first.

As you complete these objectives, the interested party will ease into a diplomatic and peaceful relation. This directly affects the trust rating and results in the provision of military units and other valuable resources for the player’s faction.

Have good diplomatic relations will also increase the reputation, race relations and opinions between the two settlements as we’ll delve deep into these mechanics down below.

As we discussed above already, there are multiple ways to go about a particular settlement other than just war or alliance. Now, players can utilize multiple roads as they achieve their victory goals. Most of these methods are non-violent and non-combative in nature.

When it comes to NPC settlements, the AI has been reinvigorated so they make actual logical and strategic decisions, making them feel more life-like. Any change or alteration in the faction’s relation with the player’s group is foreshadowed with hints of warnings or advisory messages so no turn or twist feels forced, abrupt or sudden.

The biggest change, undoubtedly, is how the Diplomacy system is presented in-game with a far more comprehensive and detailed menu for it this time around. This “Diplomacy Interface” can be brought up to review already discovered factions in detail. Each faction is represented by their “Commander”. Here you can find useful info like your relationship with the faction, their relations with other factions, their opinion and diplomatic states (more on these later).

The Diplomacy Interface tab is also where you would apply your critical thinking and decision-making skills to settle on an option. The three actions you can possibly opt for any faction are:

This term pertains to a factor that can understandably trigger a conflict. Casus Belli can arise when the other settlement provokes your faction into a war. Other reasons for a justified start of war include fabrication and very low race relations and reputation levels.

Casus Belli along with the Popular Support system dictate the penalty that a player can receive for making hasty, rushed or non-sensible decisions. Popular Support, as the name suggests, is how renowned and revered the Commander of the settlement is amongst the local population.

Automatic Casus Belli which arise due to natural events as described above will not result in harsh penalties, and these cannot be eliminated. Manual Casus Belli (only light penalties), which arise from a player’s action, can be forgiven if the war is a successful one. Alternatively, a peaceful outcome can be reached through negotiation, again eliminating the Casus Belli penalty.

Light penalties, when having Casus Belli, refer to Grudge between the player’s unit. The higher the Grudge count goes, the more likely it is to influence the opinion of the individuals in a settlement, resulting in conflicts. Grudge is increased 50 points for each Casus Belli point that a player has on another player. Grudge can only be eliminated by resolving the Casus Belli i.e. to withdraw from the war.

Relations between the player’s race have some economic and diplomatic effects by default. You can check out the race of each Commander and their settlement under the Diplomacy tab. Apart from gaining Casus Belli, bad race relations can also lead colonies to lose happiness, units to lose morale and camps having a lower influence. Bad race relations will also result in opinions of the units being affected negatively.

Opinion dictates how the player’s settlement perceive the player’s decision. Each relation is unique in this regard and opinions are used by the AI units in the population to take action. Some of the actions that can immediately result in negative opinions include:

Reputation is the image of the player and his settlement in the eyes of the world. A high reputation level leads to a good opinion among the individuals and the costs of Dwelling shops is also favored. Meanwhile, a bad reputation can incur Casus Belli and result in negative opinions.

Reputation levels are categorized into 7 tiers with Virtuous being the highest (<600 points) and Deplorable being the lowest (>600 points).

How to Manage Age of Wonders: Planetfall Diplomacy

In an ideal scenario, the Commander of the settlement should strive for a peace pact and relation with the other faction. This calls for refraining from war (be it through Casus Belli or without), having good race relations and completing tasks of these factions.

For all things to go favorably, the player is required to devote more time and effort to the Negotiation tab from the Diplomacy Interface. Here you can take part in small but valuable tasks like offering gifts, listening to the NPC faction demands and handling outpost events. Before you can complete these tasks, the screen will tell you if the action is favorable for you only or for both sides.

Everything is affected by the Diplomatic States which the player can opt to increase base opinion, reputation, and race relations quite significantly. The highest Diplomatic State, Alliance, allows the Commander to call in a different faction if the player is at war. Under such a state, the intelligence treaty can be shared.

Subsequent lower states like Defensive Pact and Non-aggression pact allow for a shared Vision treaty, Open Borders treaty, Good Neighbors treaty and more. On the other end of the spectrum, a Neutral diplomatic state will provide no bonuses when it comes to unlocking treaties, but there are no hostilities involved either. The most negative state is that of War, which only unlocks a Truce treaty and decreases race relations, reputation, and opinion. However, it does give way to a Vassalage.

A Vassalage refers to an Alliance sub-state which can be carried out while the two factions are at war with each other. This is an activity made available towards the latter part of the game. Under the Vassalage, the stronger army (with more units, strength, and influence) will become the Overlord and take the other settlement, now a Vassal, in a locked pact.

Being the Overlord will mean the Vassal has to accept the Overlord’s call to war, never break a treaty and remain in the alliance as long as the Overlord wishes. So, when you’ve become quite the expert in the strategic concepts of the game, you can strive for the Overlord status for the ultimate dominance of other settlements.

For more Age of Wonders: Planetfall, take a look at our Global Resources Guide, Modding Guide, and Tips & Strategies Guide.