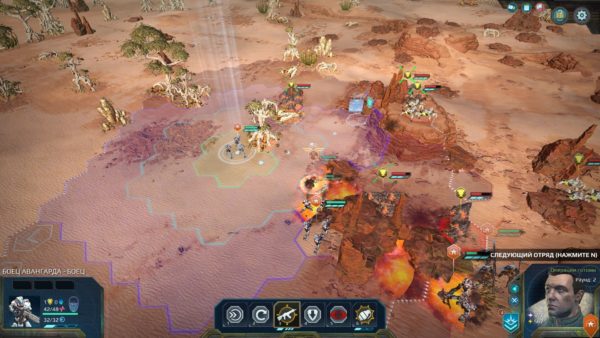 Planetfall provides two integrated approaches to combat within the 4X grand map. The traditional Civilizational-style of hex on hex interaction with battles being auto-resolved using a “rock-paper-scissor” style system to determine combat winners or the signature ‘tactical’ approach.

In Planetfall, you can conduct the battle on a granular scale, commanding each unit individually on an RTS style map while utilizing the environment to provide bonuses to your units in a turn-based XCOM-esque battle. And while your approach to each battle will depend on which race you play, there are certain general paths that you should be aware of.

Let’s take a general look at what you should be looking at to win in tactical battles in Age of Wonders: Planetfall.

When entering a tactical battle, you will be greeted with a randomly-generated map whose theme will be based on the hex your units were standing on when the battle was initiated. An example would be that if your units initiated battle on a forest tile, the map generated for the battle will have a forest environment complete with fixtures that would be relevant to a forest.

Remember not only the units on the tile will be in the battle but also units in any adjacent tiles will also be in the battle, so plan your battles accordingly and be wary of adjacent enemy units before initiating combat.

Also, harkening back to a few RTS games of old, the Age of Wonders series has Hero units. Individual units capable of greatly boosting your armies, changing the entire battlefield, throwing enemy units into disarray or some combination of the three. Age of Wonders: Planetfall gives these hero units a heavy sci-fi twist.

You can mod them like regular units with whatever you have available, though what is unique is that Heroes gain experience, level up, and develop new abilities. What they develop is entirely up to you and the playstyle you want to adopt. Want to lead an always aggro army, rushing enemies down. Build your hero with abilities that enhance unit movement, damage, and give the Hero the ability to stagger enemies.

Battles are all turn-based and the comparison to XCOM is quite warranted. Most tactical battles play out as smaller XCOM squad missions and on average end in around 5-6 turns. Therefore, your playstyle whatever it is should not worry about long drawn-out battles but rather a very efficient use of the resources you have made available to yourself prior to initiation of the battle.

The units you bring with you into battle need to be well thought out before you initiate or defend. Ensure that your armies have a balanced set of unit types and have cover from other armies in adjacent hexes, remember the lone wolf will always have a difficult time winning.

Most of the units in Planetfall have a few simple abilities in combat which play into either shoot on sight or wait till an enemy unit shows up and shoot. For example, the Dvar Foremen can heal and their Trencher compatriots have an ability to dig in and create a protective barrier around their position.

When utilized at the same time they create a strong rearguard that melee units usually can’t get near enough to hit. This, in turn, could allow your Hero to do what you need it to do, whether that’s rushing in and dealing massive melee damage or sniping with great accuracy from afar.

Remember to utilize the environment for different bonuses and defenses for units while also perhaps creating hurdles for enemy units and allowing yourself better line-of-sight. Then there are operations, which add another layer of decision-making and strategy to the turn-based fights, acting the same way as spells did in the original fantasy-based Age of Wonders games.

Although not available in the first turn and also until you research them, you won’t have much in terms of variety, but later into a game, they allow all manner of buffs and special attacks.

Plan ahead, think on your feet and make sure to equip your soldiers with the latest and greatest, these are the take-away for combat in Planetfall.

Although in truth you could skip all of this and just auto-resolve battles like in traditional CIV games, but then where’s the fun in that? Happy hunting on the new planet!

For more on Age of Wonders: Planetfall, be sure to check out our Modding Guide, Tips & Strategies Guide, and Global Resources Guide.