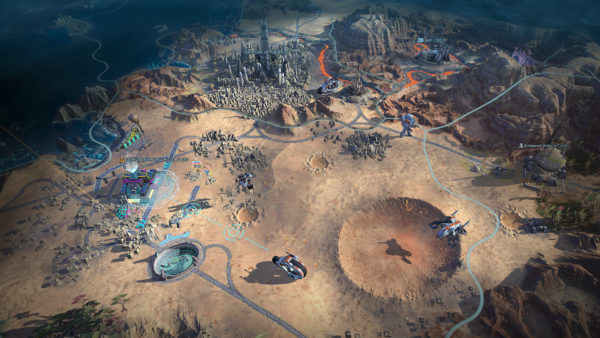 Colonies in Age of Wonders: Planetfall comprise of essential sectors within your settlement that focus on the production of resources and serve as shelter for your citizens. As you expand your empire, it would become imperative to double down on the strength and success of your military and social units. This calls for colonizing lands east and west to give you an edge in Age of Wonders: Planetfall.

By default, the colony for a commander and his followers is one where the ship makes Planetfall. This colony serves as the primary settlement responsible for the economic growth with Global Resources like Energy, Knowledge, Food, and Production.

The individuals of the population are known as Colonists and their number dictate the size of the Colony. The natural growth limit and success of your Colony is dependent directly on the Resource Slots it contains. While setting up colonies and expanding your empire helps you become more dominant and menacing to rival factions, this also comes at a certain cost.

Colonies require a defined maintenance or upkeep cost. This applies to the Colonists whose main attributes you’ll need to take care of our Happiness and Food.

Colony Centre and Other Sectors

Acting as the chief capital of the Colony, the Colony Centre is where the military and research buildings are constructed and production of resources takes place. Moreover, Colonists reside in the Colony Centre and determines the number of provincial sectors the Colony can have.

You heard that right, income generated from all annexed provincial sectors will be gathered at the Colony Centre. It goes without saying when the Colony Center is taken over by an enemy faction, all annexed sectors are lost with it. Annexed sectors can be exploited by attributing them to one of the four economic types of your desire: Energy, Food, Production or Resource. Successful exploitation of sectors leads to more Colonist Slot, increase Sector Level, Sector Yield and further economic bonuses.

Sectors can be of different natures as to what type of resources can be generated from them. These are dictated by their Clime (climate). Some of these are Arcadian, some Fungal, while others are the Arctic, Arid or Oceanic. The other factor pertains to their Terrain ranging from mountains and plains to forests. Some rare sectors even have terraforming abilities. Either the Players and NPCs can own and hold full control over the sectors.

Colony Growth is tied closely to the number of Colonist slots available, as we discussed above. The population of Colonists, in turn, allow you to annex and hold more Sectors thereby expanding your colony and increasing your production. The breakdown of slots is as follows:

The key to a high Colony Growth is to fulfil the Colonists’ requirement of Food. If the Food output is low, the Food Sharing option can be adopted to prevent food deficit and starvation.

To annex a sector, simply move your unit over to the flag of the Sector and select the “Annex Sector as Province to Colony” option. There are some requirements to be met first before you can annex a sector and make it part of your colony. Firstly, Sectors can only be annexed by a colony if they are within two sectors of the Colony Centre. They are required to be adjacent to another sector of that same colony.

Some additional sectors comprise a dominant structure like a landmark, so this requires some extra effort. You can’t just place your unit to annex this sector, but take it with force or diplomacy.

To further improve the production of the sector and thus the efficiency of the Colony, Research points are to be used for setting up Sector Specialization Structures (SSS). These provide additional bonuses to existing sectors for e.g. Production Sector can be specialized to provide benefits to Unit Production or Infrastructure Production.

Sector Level also comes into play as a high level will result in significantly increased output. It will also, indirectly, scale up the bonuses and effects of SSS. The Sector Level can be increased by spending Research points in the Society Research Tab and building Level Boost Structures.

As briefed on above, Colonists have an upkeep cost of 2 points of Food and 1 point of Happiness. If the value of Food drops below 0, Colonists will starve and will eventually be required to be removed from the Colony. As for the Happiness attribute, anything below a 0 will result in Riots which is devastating to the economy of the Colony since unhappy Colonists don’t produce resources but will still require upkeep.

Similarly, idle Colonists should be assigned to a task because failing to do so will set you back economically as they won’t be working on any resources but still demand upkeep. You can have greater control of how Colonists work via the Colonists Tab in the Colony Interface. Riots can be eliminated by restoring Happiness. Alternatively, you can set up a Martial law, but this comes at the expense of some economic drawbacks.

Since you’ve put so much work into the building, developing and upgrading your colony, it’s only fitting to keep it safe from foreign invasions and conquests. The main defensive options for the Colony include setting up Garrisoning units, Colony Militia buildings, and Turret buildings, the two latter being only available in case of an attack. These can be upgraded for better results and high tier units. Turrets’ damage channels depend on the race of the unit, ranging from Kinetic or Biochemical to Psionic or Laser.

Once you’ve perfected and upgraded the capabilities of a Colony to the max, you don’t want to stop there. You can acquire additional colonies by using the Colonizer tool which is faction-specific. Utilizing the Colonizer requires population points.

If you feel confident enough, you can also fight your opposition factions and defeat them to take their colonies under your command. The most consistent method of conquering new colonies, at least early in the game, is to annex Independent Outposts which won’t put you through much hassle. You can turn these outposts into a fully-fledged and well-functioning colony, while also integrating their population units into an existing colony occupied by the player.

Independent Outposts may be occupied by either spending Influence points or by using combative measures.

For more on Age of Wonders: Planetfall, be sure to check out our Console Commands Guide, Vanguard Units Guide, and Combat Guide.