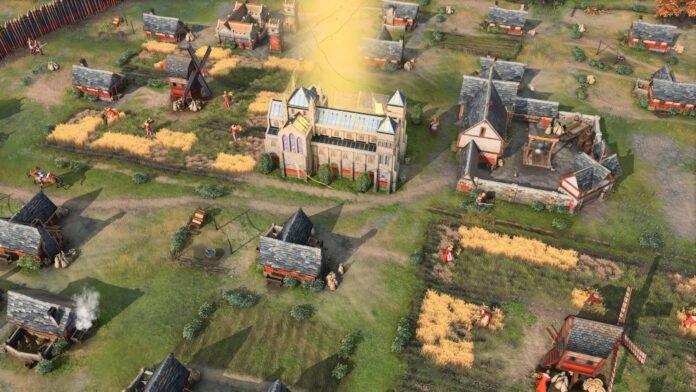 The Rus civilization is a master of the wilderness. Rus expand the economy early on via the Hunting Cabin and Hunting Bounty Score. In this Age of Empires 4 guide, we are going to go over everything you need to know about the Rus civilization including bonuses, unique units, perks, landmarks.

The Hunting Cabin replaces the Mill and generates gold based on the number of surrounding trees. As you hunt animals the Hunting Bounty Score increases and gives you more food income and boosts harvest rates. This will help you gather resources quickly in the early stages of Age of Empires 4.

Rus can earn gold by hunting for animals. They can also build stronger walls and forts. Villagers gather more wood when they are under the influence of a fortress. Do note that the Rus do not have access to stone walls and need to rely on palisade walls. While the civilization has access to early cavalry units, the civilization has limited naval units.

The strength of the Rus army is in their cavalry. The horse archers can attack from a distance and their health can be upgraded with research. Rus has access to the Warrior Monk which is on horseback. This can buff surrounding units and change the tide of the battle. Warrior Monks can also carry relics which means that they can convert enemy units. The Streltsy is a powerful hand-cannon unit that is unique to the Rus civilization. When stationary the attack speed and damage of these units increase thanks to the static deployment ability.

The following are the different landmarks that the Rus civilization can make as it progresses through the ages: