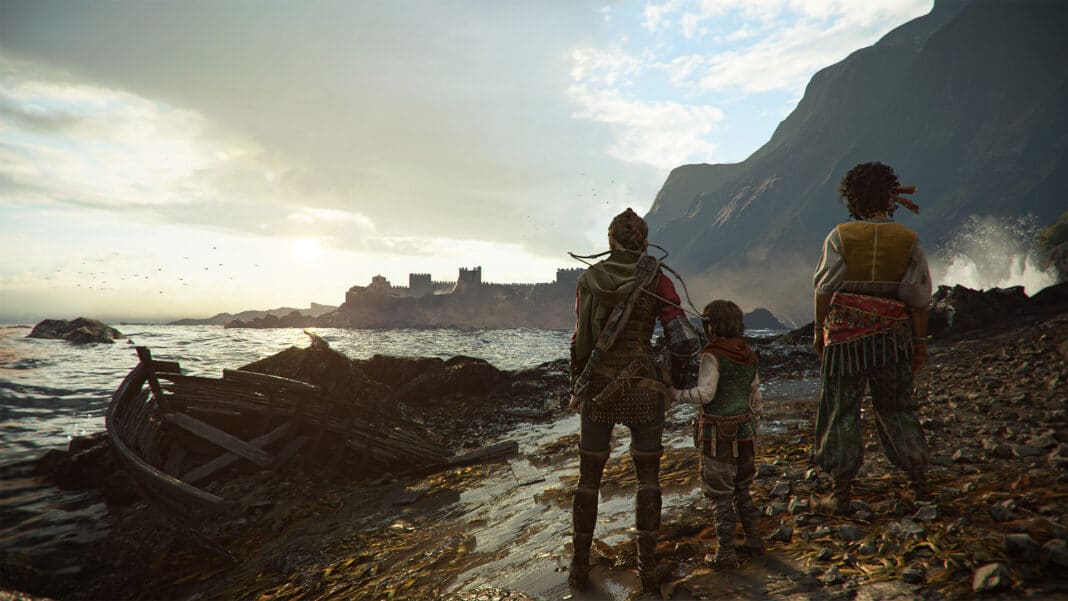 In A Plague Tale: Requiem, Amicia de Rune has to defend her brother Hugo from fresh threats after believing he was safe from the Inquisition. Even though the siblings avoided the Inquisition and defeated Nicholas, a new threat arose.

The de Rune family needs to find another safe haven after their close encounter with the insane town residents. As the family continues strategizing about how they can live peacefully, Beatrice is aware of a nearby town that can shelter them. The second chapter of A Plague Tale: Requiem is called Newcomers, and this walkthrough will explain how to go through it.

The de Rune family arrives in a new town at the beginning of the chapter. After meeting at the castle and on the road, the de Rune family expects better fortune, leaving them still unsettled.

On their trip to their new home, Beatrice will ask Amicia to tour the region with Hugo. Near the entrance, there will be many merchants you may talk to and even test some meat.

You will eventually arrive at a square with a man reading the day’s news if you keep walking along the walkway. Amicia will remark that she can see the home’s roof if you continue to go straight.

As you browse the shops, you’ll see something your deceased father liked and other traders offering you products or haircuts. Hugo will talk to a florist close to the marketplace exit and express his love for her goods.

After you leave the florist, the path splits. At the end of the walkway to the right, there is a carnival game where you must destroy as many cubes as possible with four shots. Amicia and Hugo will eventually locate Lucas, who will show you how to your new house after you’ve jammed out to the performance for a while.

It’s time for a well-deserved nap now that you have located the residence. For the de Rune family, “rest” unfortunately does not exist. Hugo experiences a nightmare, indicating that the Macula in his blood is having an impact on him. Lucas offers to assist Amicia in her search for Magister Vaudin, an Order member after Beatrice urges her to locate him.

As the two enter the town, Lucas guides the guard to the florist and inquires about Vaudin. To locate the florist you spoke to earlier with Hugo, proceed down the path and turn to the left. The florist instructs Amicia to look for her husband by the fountain and mentions that he is donning a brown tunic when you speak to her again.

You’ll soon discover him raking leaves if you keep moving down the path you’re on. He will advise you to look in the arena neighborhood when you ask him where Vaudin is.

Two soldiers will be barring the entrance and informing you that the arena is closed when you reach the trail’s end. Amicia and Lucas will find a secondary entry down the walkway to the right after spotting the Order’s mark on the arena wall.

Amicia and Lucas quickly detect something wrong when you enter the arena. The arena is littered with the dead bodies of those bitten.

The two believed the sickness was extinct because they hadn’t noticed the effects of the Bite in a while. You can find another Order mark above a door by moving through the arena until you reach it. You may see an aperture above you after you enter the room. Use the cart in the adjacent chamber to help Amicia and Lucas climb the wall and get to the opening.

There will be a soldier pestering someone after you crawl underneath the obstruction.

You can return inside by a ledge at the end of the hallway, but it is too steep to climb up. Past the pig, there will be a half cart that you must scale the ledge to reach. Break the latch with your slingshot so you can dump the cage of bodies onto the cart and climb to the ledge.

Climb up and dash down the corridor until you see a board with what appears to be a list of deceased people. Remove the knife, crawl through the gap, open the door, and escape to return to the outside. When you descend from the ledge, you will see several troops patrolling the area and an archer firing arrows randomly.

You will need to move cautiously across the region because you lack the offensive skills necessary to defeat the soldiers head-on. Use the structures around you as cover since the archer can clearly see you from his perch.

You can also use the pots in the area to occupy the guards. You can take other paths, so pick the one that will meet the least resistance. Stick to the right side, where only two soldiers are patrolling, and use the pots to attract their attention.

Reach the door as soon as the archer’s attention shifts to something else. Once the door animation begins, you won’t be assaulted even if an enemy sees you.

To get to another door, proceed past the sea of corpses and up the stairs. You will eventually reach a wooden ledge with a panoramic view of the entire city. Amicia and Lucas can make out a massive tower with the Order’s emblem in the distance.

The platform will crumble under the weight of Amicia and Lucas when you jump off the brink. When you try to keep the rats out, millions of them will start chasing Amicia and Lucas and crashing through the walls.

Light additional combustible items to scare the rats away and use the torch to safely navigate the sea of rodents. When you eventually get to a ledge, you’ll need to hang the torch from the wall because there are sticks you can light on the opposite side.

He will beg Amicia to toss another stick once he reaches the top so he may return to her.

Back in the hallway of dead people, descend the stairs, and you will find yourself. A room with an elephant skull on the floor will be at the end of the hallway.

To get to the crank, climb the side steps. The rooms on either side will open up when Lucas turns the crank; regrettably, the gates will also open, and a swarm of rats will pour inside the chamber. To gather the necessary supplies to ignite the brazier, Amicia will need to search the chambers on either side of the crank.

Leave this room and proceed to the one next to the crank. Use your slingshot to kill the hanging cow so the rats can clean the space below before interacting with the right side wall. To eliminate the remaining rats, there will be another cow hanging to be shot down. Climb the ladder after jumping off the ledge to find the Alcohol that will be needed to craft the Ignifier.

You may now make Ignifer using alcohol and sulphur. Lucas will instruct you on how to combine the Ignifer if you climb the ladder. Open the weapon wheel to create Ignifer, and use your slingshot to shoot the room’s central brazier.

You can descend to the bottom section by climbing down to the middle chamber when the rats leave it. Lighting the brazier in the now-open gate requires using your slingshot and an igniter. For more crafting materials, open the chest.

Ignifer can be combined with a pot to eliminate the remaining rats once you relight the torch on the wall with your slingshot and another round of Ignifer.

Use your sling to break the clasp on the hanging cow so the rats can eat it now underneath the torch. Between the cages is a chest that contains more materials. You can find the first crank if you quickly head up the stairs. So that you can move to the opposite side, tell Lucas to remain at the crank.

Run across to the freshly opened section after jumping off the cliff. To light the brazier and unlock the chest for more resources, use your sling and Ignifer. A ladder will be visible at the room’s far end, but rats will be in your path.

To get rid of some of the rats, open the hanging brazier’s latch and fire the brazier. After clearing the remaining rats with Ignifer and a pot, ascend the ladder to the second crank.

Steer Clear of the Guards

The middle brazier will completely touch the ground after the cranks are turned. The central platform will rise again as you let go of the cranks. Hurry to the platform, then run up the stairs to the outside.

Amicia and Lucas may now get a better look at the tower with the Order insignia. As you proceed through the wreckage, you’ll come across the Arrowhead, a flower for Hugo’s collection.

A couple of them will be heard announcing that Vaudin is in the tower. Find a ledge that will lead you to the upper right side by going around the back of the building. If you need to stock up on supplies before scaling the walls, pots and other items are within the dwellings.

There will be a pile of sticks when you descend the stairs. Because there are three guards patrolling to the left, one guard inside the house in front of you, and one archer on top, this phase can be challenging.

Wait patiently until the right moment to enter the house. Rats will start to burrow from the earth as soon as you leave, so carrying that stick is crucial.

Run up the stairs after moving to the right and lighting the stick. You can take cover behind the railings because another guard will be patrolling the area.

After a little distance, a pot will be on a shelf to the right. Clear the rodents below using the pot and Ignifer, then jump from the ledge. You can use your slingshot to kill the archer watching the area.

Amicia informs Lucas after locking the door that she is concerned for Hugo and that he is constantly afraid the rats will come again. The iron bells with planet symbols can be found down the hallway after the cutscene is done.

The bells must be struck with your slingshot in the proper order for them to ring: Jupiter, Mars, the Sun, Venus, and Mercury. The side entry will open once the proper sequence has been set. Magister Vaudin can be found if you go up the stairs.

Amicia is the Carrier’s Protector, and the Magister explains why she is important to the Order. When she informs him that Macula is back, Vaudin offers to assist Hugo.

That’s everything you need to know, but if you need more help, here are some guides you may find helpful: